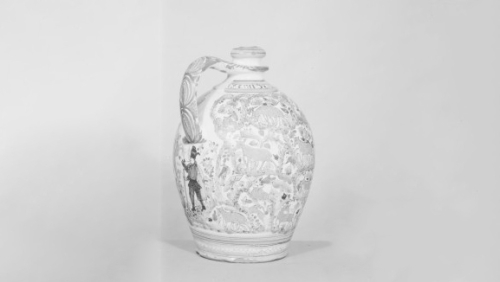 In the second half of 1942, the MAK made an inquiry to the Dorotheum auction house about the estimated prices of objects from the collection of Ernst Pollack. In 1943, the museum purchased 42 objects from the collection from the Vugesta (“Verwaltungsstelle für jüdisches Umzugsgut der Gestapo,” the Gestapo Office for the Disposal of the Property of Jewish Emigrants) with the help of the Dorotheum. After prices had changed, 13 objects had to be returned to the Vugesta in May 1943. Two objects were lost in a fire at Immendorf Castle, Lower Austria, where they had been put in shelter, in May 1945. The heirs of Gisela Pollack agreed to a restitution settlement in 1949, according to which 20 objects were restituted in exchange for a donation of nine ceramic objects.

On 27 March 2000, the Art Restitution Board recommended that the nine objects that had remained at the MAK be restituted.