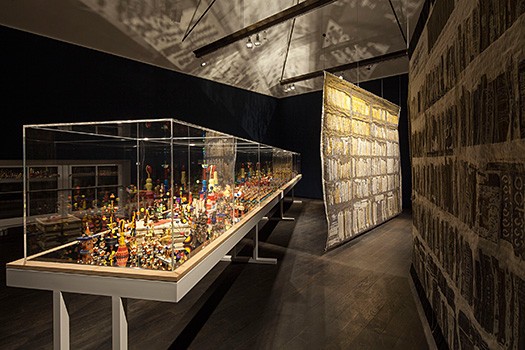 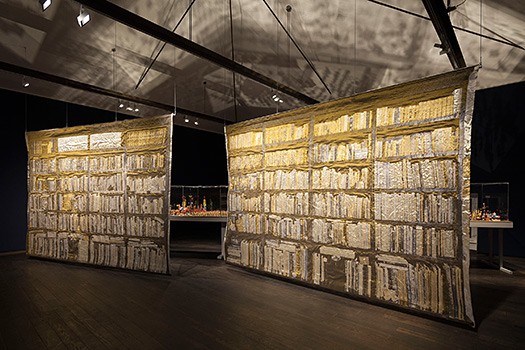 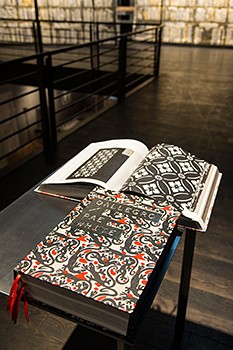 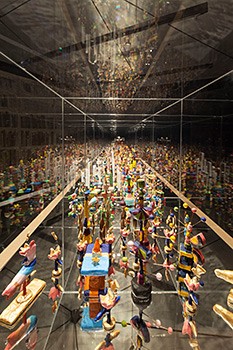 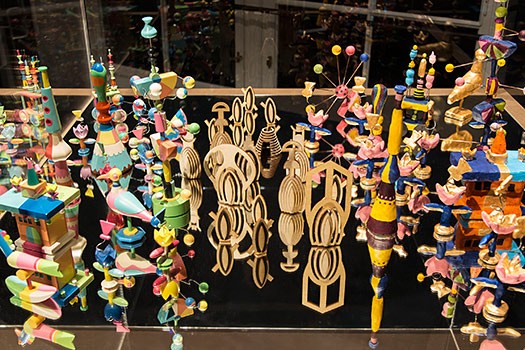 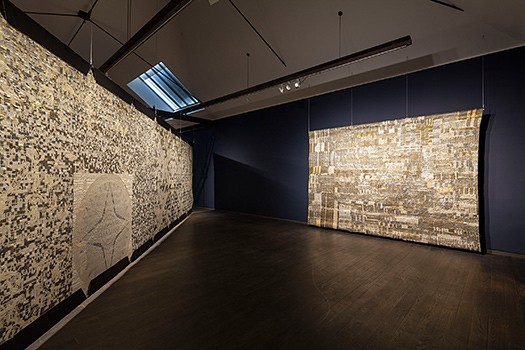 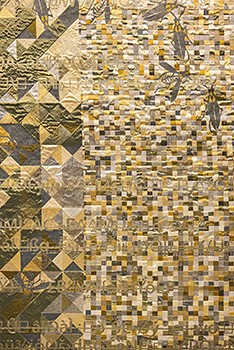 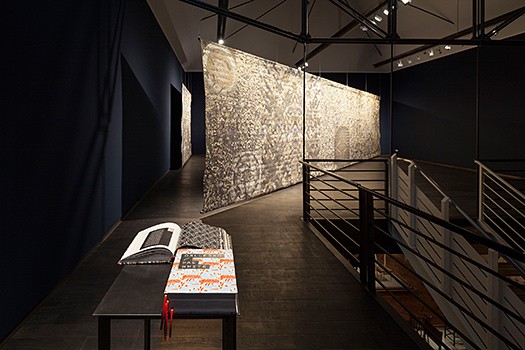 O R L L E G R O is an aggregation of fabrications, interpretations, simulations of history, narratives, and objects, some of which were sampled from works of the MAK Collection. The exhibition title references a fictitious word invented by the textile industry in the 1950s, promising a magical material that was a faux version of something real and perhaps altered the way the world viewed synthetics: assigning an invented word to a fake material, it activated a false nostalgia from an artificial past to render a stylish, more sophisticated—yet equally artificial—future.

Playing with the idea of the epic and magical, Pae White produced monumental tapestries woven entirely from metallic thread. In these works, White questions the expected, more conventional depiction of historic subject matter in large scale tapestries by substituting smaller-scale histories—broken links, digital debris, fabric scraps, and entire sections of White’s own personal library—and monumentalizing them through the perceived opulence of the metallic thread.

While working at the MAK in preparation for OTHERS (MAK Contemporary Art Collection, 21 November 2012–23 June 2013), White mined the museum collection for raw material, finding that the areas that most interested her were the sections of storage inhabited by objects whose authors were mostly unknown. By repurposing some of these forms White reshaped the meaning of the objects, freeing them from the familiar and perhaps tired narrative, and rejecting received interpretations in favor of those hoping to create a new viewership and stimulate a set of associations and memories of those very objects for the audience.

During one of these visits through the MAK storage White encountered a trove of long forgotten toys produced in Vienna in the 1920’s. She documented these thoroughly, studied them carefully, and arranged them into a multitude of configurations. After a series of edits, a chess set was born, but one that disrupts the traditional hierarchy of the game by equalizing the pieces. Images of this set were then launched into the world, specifically to a group of fabricators that she knew and worked with regularly in Mexico, Lithuania, and China and a few new ones in Germany and Ethiopia; a small group of Los Angeles based artists also stepped in for the exercise as well as an artist in the UK. The objective was to resuscitate these nameless, neglected objects by inviting fresh and detailed scrutiny of them, eliciting an array of interpretations from around the world as well as creating a cultural cross-pollination of form and color.

A 720-page artist’s book is also found in the exhibition. Acting as an unstructured index for both O R L L E G R O and OTHERS, this book is a relentless repository of rarely seen ephemera from the MAK’s collection as well as bits and pieces from White’s personal collection of street ephemera. Included are scans of hundreds of katagami (Japanese cut stencils), of numerous commercial papers (authors partly unknown), and of leather stamp imprints from the Wiener Werkstätte, all from the MAK Collection. Interspersed are scans of paper scraps found on the streets of East Los Angeles, as well as source images for the tapestries, etc.