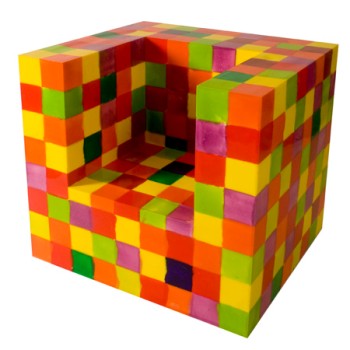 What does design progress mean? In many cases it is ‘discovery’ and adaptation of new materials. Bauhaus revolutionized the style of living with tubular steel furniture. Later it was plastic which brought on a design revolution. Its various qualities and outstanding performance as well as processing possibilities and a wide range of designs that plastics facilitated made this material appear innovative and ‘modern’. Today, our everyday life is hardly imaginable without plastics although our relationship to this material is highly ambivalent. When designers first came to use it plastic stood for mass-produced cheap products. However, this meant to underrate by far the performance potentials of the material: today, processes such as rapid prototyping, rapid manufacturing und mass customizing indicate the full range of possibilities afforded by plastics. In addition, there are the comparatively inexpensive production of unique pieces and small series and the construction of highly complex geometries.

But plastics are not all the same; there is a large variety of chemical compounds that come under this fairly generic term. One of them is silicone, whose discovery is commonly attributed to two chemists: in 1940, almost at the same time, the American Eugene G. Rochow and German chemist Richard Müller found a possibility for the large-scale production of methylchlorosilanes, which are an important intermediate product in making silicone. The process has since been referred to as the Müller-Rochow synthesis. And, as so often, accident had an important role in it, which the German chemist Richard Müller described as follows: “In 1932, I had this idea of inventing an artificial fog to envelop entire cities in case of war. You know, they did not have radar back then. After years of testing—meanwhile we had arrived in 1941—I continued with experimentation in a different direction. Then I finally discovered a viscous white substance—silicone.”

Today, silicone is the basis of many innovative high-tech products in medicine, in architecture, but also in design, and it is no longer used, as it was originally, as an adhesive or sealant only. Today, a broad assortment of silicone polymeres is offered, for example, oily, hydrophobic, paste-like, resin-like, or rubber-like, each with different specific qualities. The range spans from colored and opaque to transparent and from soft to hard.

Alessandro Ciffo’s “Multicoloured Furnishings” of silicone embody the flowing dialogue between creativity and the special physical qualities that this material of the future has to offer. Alessandro Ciffo says about his checkered colorful furniture: “I blend design with painting, painting with volumes, the inflexibility of corners with the softness of the material and of gestures. (…) As it both challenges and softens those overly rigid theories that hinder the processes of evolution, silicone, in the end, puts all under check mate”.  (Andrea Nussbaum, 2008)

Presentation of Alessandro Ciffo's Silicone armchair, produced by
DILMOS Milano, in the course of the VIENNA DESIGN WEEK at the MAK.