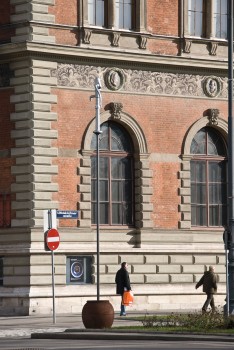 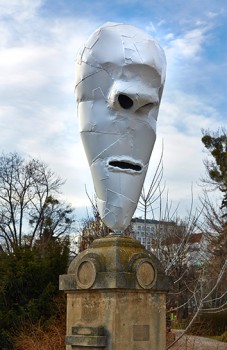 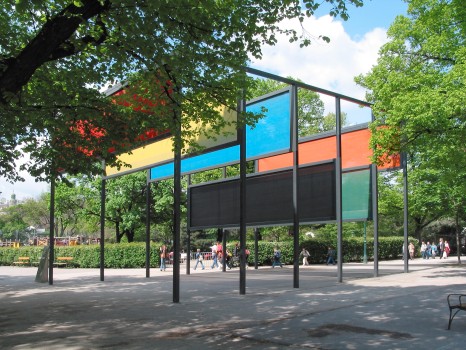 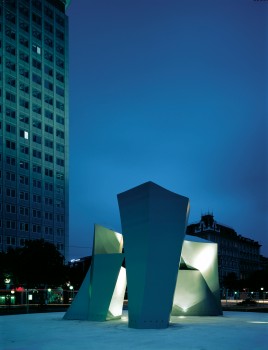 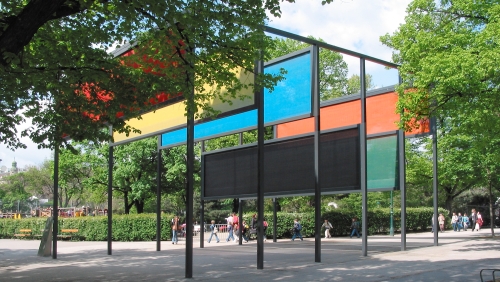 In James Turrell’s permanent installation MAKlite, intensive light pulsates in the windows of the MAK. With the unreality of a dream, the brick façade loses its static solidity, appearing as a shimmering, translucent membrane that hints, wordlessly but emphatically, of transfers being made: by means of this inner radiance, the MAK communicates to its urban surroundings the complex proceedings being effected within.

Permanent installation on the façade of the MAK since 2004

In his piece Stylit, Michael Kienzer addresses the subject of sculpture in the public sphere: he interprets space as an archive of objects, which he juxtaposes with an elongated vertical sculpture which, however, unlike all other urban furnishing objects and elements, is marked by perplexing differences. On the end of a several meter long rod or pipe, which grows out of a pot-like pedestal, he mounts a well pump which—unreachable for pedestrians passing by—sits at the height of the treetops and street lights.

After an extensive restoration with the support of the lender and the Franz West Privatstiftung as well as the MAK ART SOCIETY (MARS), the 4 Larvae (Lemur Heads) (2001) by Franz West (1947–2012) have returned to the Stubenbrücke in Vienna in January 2016. On the occasion of the MAK retrospective Franz West: Merciless in 2001, the 4 Larvae (Lemur Heads) were displayed on the pylons of the Stubenbrücke, which connects Weiskirchnerstraße and Landstraßer Hauptstraße in the city center.

The seemingly ancient 4 Larvae (Lemur Heads) made of painted, sculpted aluminum, which extend up to three meters in height, invite viewers to engage in a dialogue with the sculptural objects and combine with the symbolism of the inherently flowing water of the River Wien, whose loose, flexible, and unpredictable form leads to associations with chaos as a creative flow and a primeval material.

Donald Judd's Stage Set is the expression of an uncompromising vision situated between art and architecture. Six panels made from differently colored strips of fabric are mounted at differing heights within a steel framework of 7.5 x 10 x 12.5 m. These panels rhythmize the open space and visualize serializations and processes that are characteristic of Judd's work Donald Judd developed Stage Set for the MAK in 1991 on the occasion of his exhibition Architecture. The installation was gifted to the city of Vienna in 1995, and it has stood in Vienna’s Stadtpark since 1996.

Philip Johnson's Wiener Trio was installed at the intersection of Franz-Josefs-Kai and Schottenring in 1998. Each element of the tripartite object has a sculptural character of its own. Seen together, however, they represent a kind of architecture, reflecting the American architect's longstanding and intense exploration of monumentality.
Philip Johnson developed this object in 1996 for a MAK exhibition entitled Turning Point. The installation of this extraordinary object in the public space was made possible through the generous support of the insurance company Wiener Städtische Allgemeine Versicherungs AG.

Franz-Josefs-Kai/Schottenring (across the street from the Ringturm), 1010 Vienna
How to get there: U2, U4, tram lines 1 + 31 / Schottenring 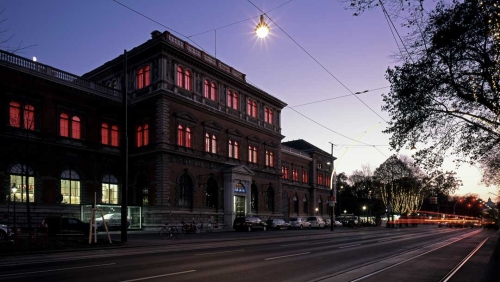 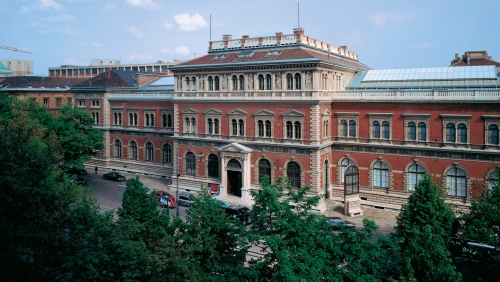 Stubenring, First District
In a way that is virtually unparalleled by any other institution, the MAK stands for the fruitful combination of the past with the future, something which can be clearly sensed and experienced when visiting its extensive collection, large exhibition halls, themed special exhibitions and discourse-centered program of events. Bringing together applied arts, design, architecture, and contemporary art is one of the museum’s core competencies, in light of which it becomes apparent just what contribution the interplay of these areas is capable of making to overall cultural development.