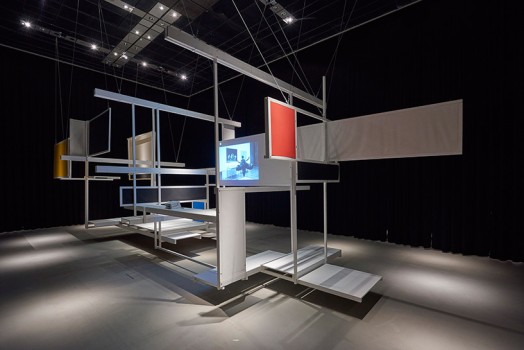 Frederick Kiesler, View of the Raumstadt [City in Space] 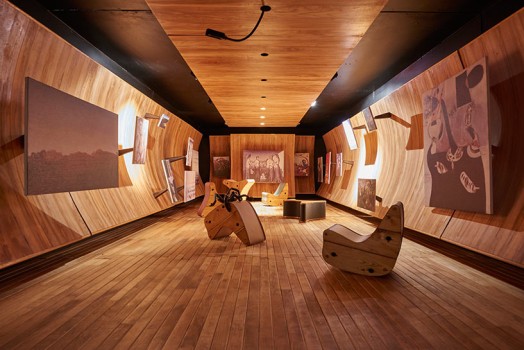 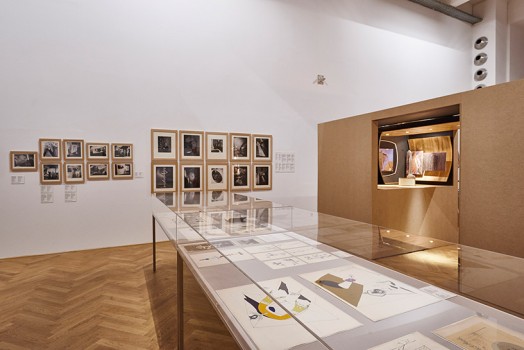 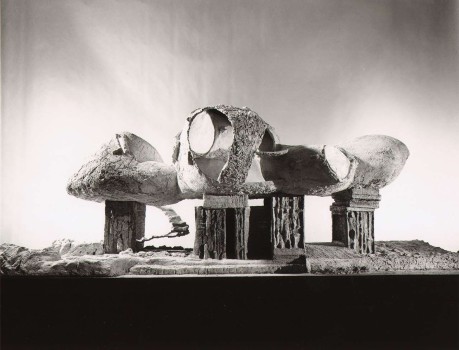 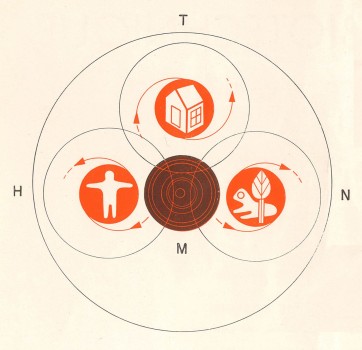 diagram for "On Correalism and Biotechnique", illustration in Architectural Record, New York, 1939 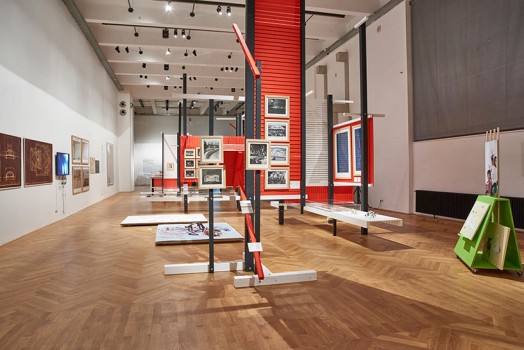 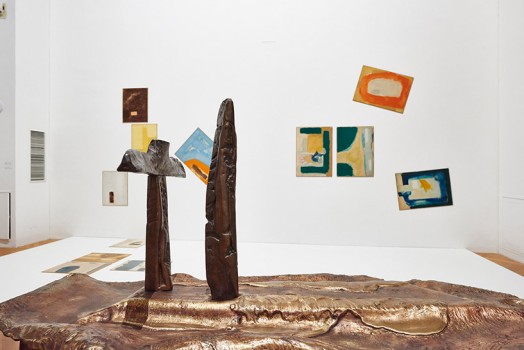 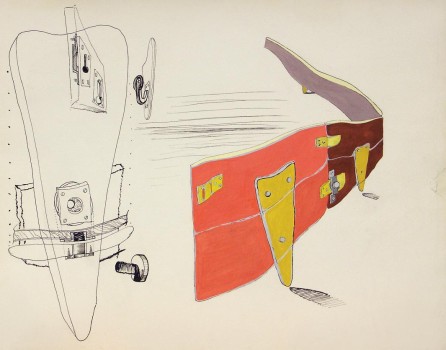 Frederick Kiesler, U. S. Housing in War and Peace 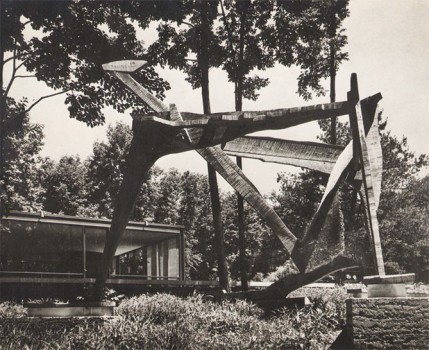 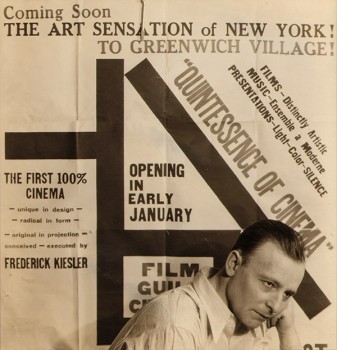 The current interest in the multifaceted oeuvre of the Austrian- American architect, artist, designer, set designer, and theoretician Frederick Kiesler applies most of all to his holistic philosophy—the negation of the traditional boundaries drawn between disciplines—and the importance he ascribed to the productivefusion of artistic and empirical scientific practice. In so doing, he placed the wellbeing of the human, as an individual as well as a social being, at the center of his bioscience-based correalistic theory.

The years Kiesler spent in Vienna surrounded by Otto Wagner,  Josef Hoffmann, and Adolf Loos and the idea of the Gesamtkunstwerk were formative for his entire artistic and theoretical body of work. The focus of this evocative exhibition is Kiesler’s transdisciplinary work in painting and sculpture, architecture and design, theater and film, with his theory of Correalism as well as his innovative exhibition practice being put up for discussion. His vision of a correlation between artwork, space, and spectator manifested itself in his revolutionary exhibition designs, just as much as in his Galaxies of the 1950s and 1960s.

On show is a thematic presentation of a large number of visionary sketches, photos, plans, and texts from the extensive inventory of the Austrian Frederick and Lillian Kiesler Private Foundation. These are to be supplemented by items loaned by private collectors and public institutions. For the first time, a 1:1 reconstruction of the Parisian City in Space, one of the most important architectural icons of the 20th century, will be shown in Austria.

The goal of the exhibition is to convey the visionary universe of ideas and its history-shaping potential as an influential contributor to present-day discussions about art, architecture, design, theater, and theory.

Four trenchant pictures convey the cornerstones of his life’s work: the Parisian Raumstadt [City in Space] of 1925 and the model of the Endless House of 1959, which stand for his architectonic visions; the emblematic representation of his anthropocentric theory of Correalism published in 1939; and also a photo showing Kiesler as the “inhabitant” of his monumental wooden Rockefeller Galaxy of 1952. The title of the newspaper article in which he published this photo was “Meant To Be Lived In.” This can be
understood as the guiding principle of the exhibition.

As an integral component of the exhibition, a participative educational program gives leeway to the perspectives of young people. In the course of intensive engagement with Frederick Kiesler’s visionary concept of space, Viennese schoolchildren created contributions that were varied in terms of their content and choice of media.

In cooperation with the Austrian Frederick and Lillian Kiesler Private Foundation.

Artists’ Tour through the exhibition

Tue, 12 Jul 2016, 7 p.m.
MAK Columned Main Hall
Dieter Bogner: Meant To Be Lived In
Thu, 1 Sep 2016, 4 p.m.
MAK Columned Main Hall
Jill Meißner: Stefi Kiesler. Künstlerfrau, Bibliothekarin, Netzwerkerin [Stefi Kiesler: artist’s wife, librarian, networker]
According to the saying, behind every successful man is a woman who supports him. Who was the woman in Frederick Kiesler’s shadow? For more than thirty years, in her capacity as a librarian, Stefi Kiesler (1897–1963) was responsible for the German and French language collections at the New York Public Library; she was also an important point of contact for European refugees during the Second World War. Her income made it possible for Frederick Kiesler to live an uncompromising artist’s life. Stefi Kiesler was more than just an artist’s wife and librarian, however; she was also a translator, networker, writer, and artist—a fascinating personage who has been overlooked for far too long!
Sun, 4 Sep 2016, 4 p.m. (in english)
MAK Lecture Hall
Spyros Papapetros: Frederick Kiesler’s Magic Architecture
Sun, 11 Sep 2016, 4 p.m.
MAK Columned Main Hall
Gerd Zillner: Friedrich Kieslers Endless House. Eine unendliche Geschichte [Frederick Kiesler’s Endless House: a never-ending story]
Thu, 15 Sep 2016, 4 p.m.
MAK Columned Main Hall
Barbara Lesák:  Frederick Kiesler and the architectural renewal of the theater: from the Space Stage to the Endless Theatre
The architect and theater utopianist Frederick Kiesler (1890–1965), who initially developed his revolutionary ideas in Europe and later in New York, stands shoulder to shoulder with the great theater reformers of the 20th century. His theater creations—ranging from the electromechanical stage set (1923) and the legendary Space Stage (1924) all the way to the Endless Theatre project (1926)—in 1960 led to the Universal Theatre, in which he once again realized all of his revolutionary ideas in the form of a biomorphic theater construct.

The participative educational program to the exhibition gives leeway to youthful perspectives. By engaging intensively with Frederick Kiesler’s visionary concept of space, Viennese schoolchildren created multi-faceted works to be shown in the exhibition.

Several months before the opening of the exhibition, the project had already started in collaboration with a class at a vocational school and two secondary school classes; it was supported by people working in the creative fields of design, the fine arts, architecture, and dance. This gave rise to strikingly diverse contributions, which give glimpses into the students’ life visions. *

What basic conditions does a participatory project require? What resources are necessary? When is a project considered successful? The project participants discuss their experiences together with schnittpunkt.

In a dialogue with Frederick Kiesler, class 7a of the BG Wasagasse gave some thought to the present and the future of the thought space school. What can we learn today from Kiesler and the avant garde of the 20th century?

Friedrich Kiesler’s visionary architecture projects provided the focus for class 6b of the BORG für Musik und Kunst. In a dialogue with the productive potential of the (architectural) utopia, the discussion surveys the field of tension between vision and reality.

* As a cooperation between the MAK and KulturKontakt Austria (KKA), the project was initiated with the 1e class at the vocational school for stylists and make-up artists [Berufsschule für Frisur, Maske und Perücke] in the framework of “Programm K3—Cultural Education with Apprentices.” The team toikoi_erzählende räume has taken on responsibility for the conception and implementation of the content. For their project, students in the 7a class at the Bundesgymnasium Wien 9 received KKA funding (through the “culture connected” initiative of the Federal Ministry of Education and Women’s Affairs), while for their project, students in the 6b class at the BORG for music and art were funded through the Ministry’s 2015/16 cultural budget for federally funded public schools.

FREDERICK KIESLER: Life Visions
Tour through the exhibition, followed by further discussion at the restaurant Salonplafond, total price € 15.
PROGRAM FOR KIDS AND FAMILIES

Building your dream house for beginners
Workshop for 8- to 12-year-olds
Participation fee: € 7.50

Whether Tiny House, tree house, or dream house—was does a house require? We consider Frederick Kiesler’s insights and ponder what a house of the future might look like. Guided by an architect, you can develop ideas, draw a floor plan, and realize your own dream house.

Who knows Frederick Kiesler? There is much to see and even more to discover about him at the MAK—he was an artist, architect, set designer, and designer. An endless house (without corners), floating structures (without supports), and scenery (of all sorts of shapes) will show us his world, the way he liked it. Using different materials, the workshop will be as exciting as never before.

The endless house
Guided tour for the whole family (ages 4 and older)
Admission for accompanying adults: € 7,50

Corners away! (for 6–10-year-olds)
That’s what architect and designer Frederick Kiesler was thinking when he designed a round house without corners—an endless house: cave dwelling was the idea behind it. And he had lots of other ideas that MINI MAK wants to explore with you. This summer everything is different—everything is “topsy-turvy.” Using the most diverse materials, the workshop afterwards will be as exciting as never before.

The endless house (for 10–13-year-olds)
Who knows Frederick Kiesler? There is much to see and even more to discover about him at the MAK—he was an artist, architect, set designer, and designer. An endless house (without corners), floating structures (without supports), and scenery (of all sorts of shapes) will show us his world, the way he liked it. Using different materials, the workshop will be as exciting as never before.

Fee for materials: € 2 per child

Thanks to Galerie Meyer Kainer, Vienna for supporting the project of Verena Dengler 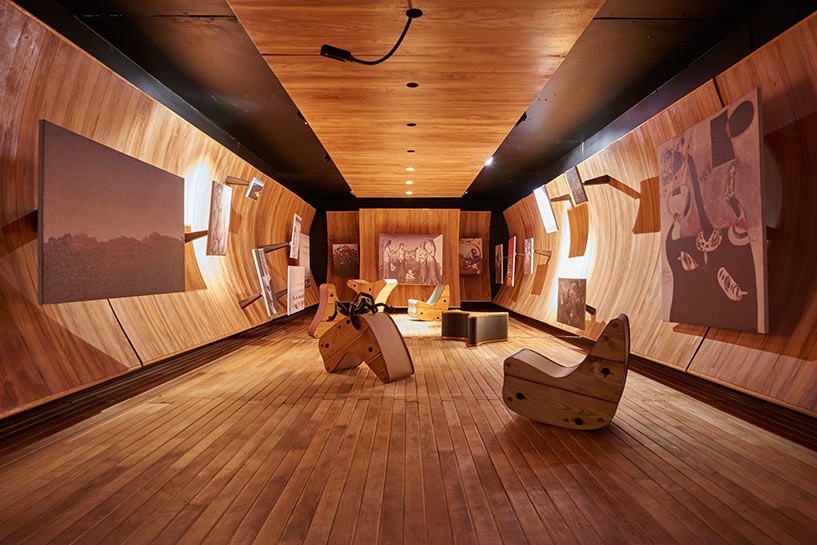 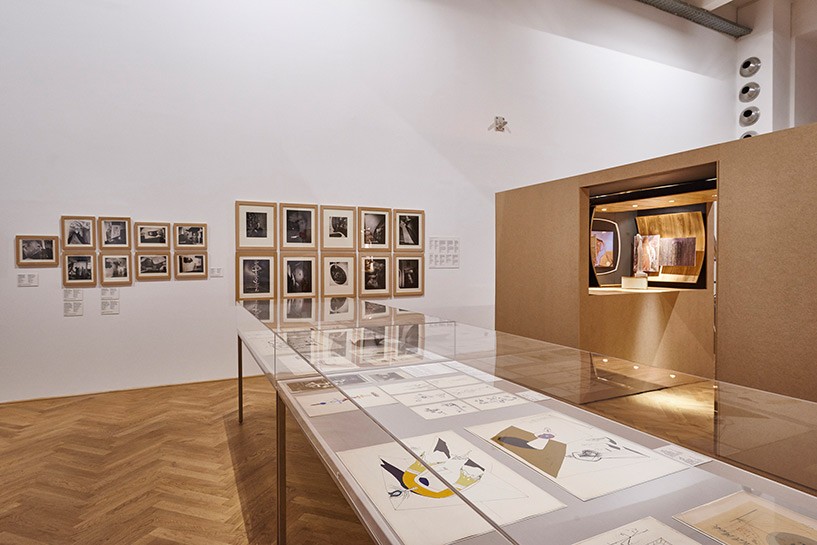 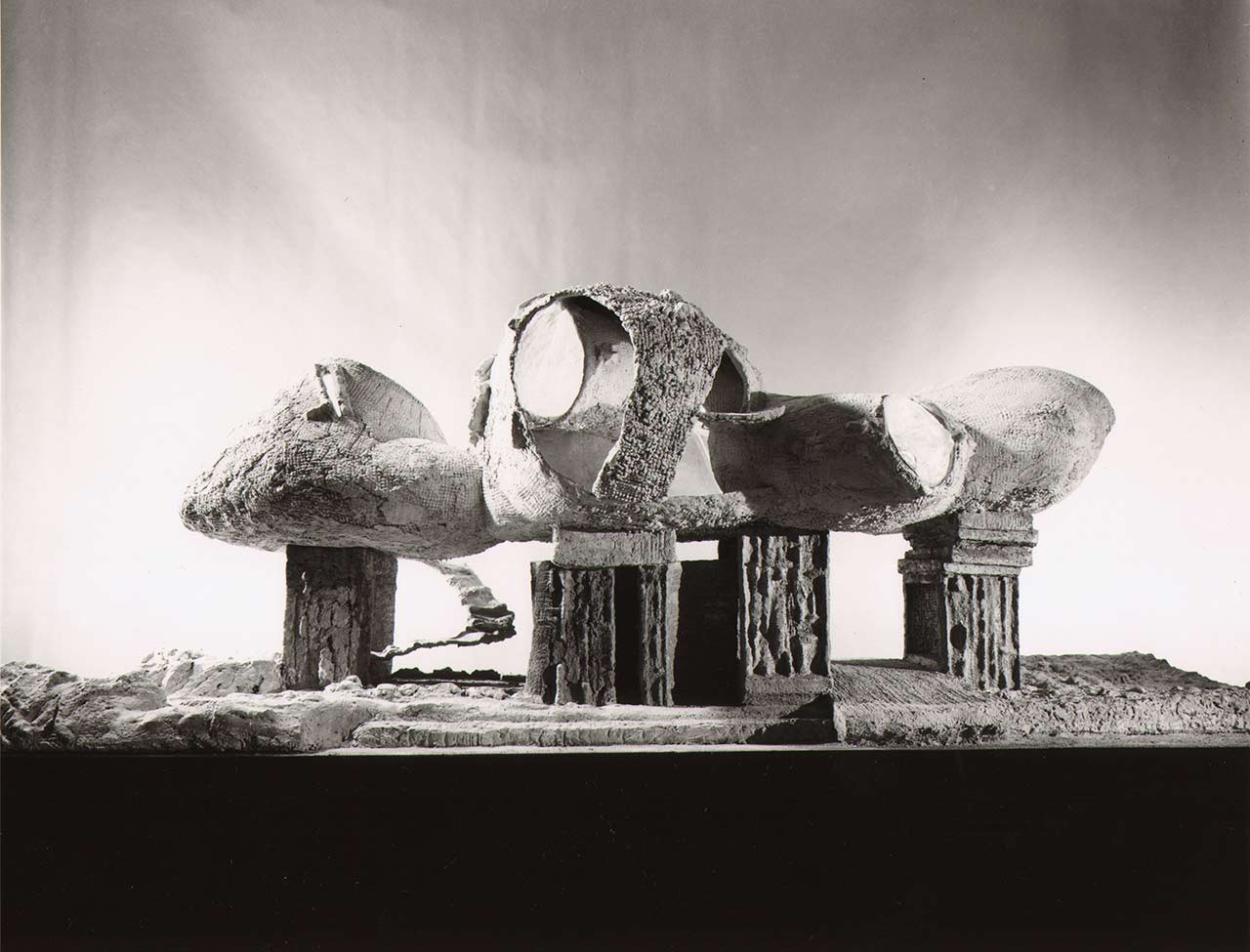 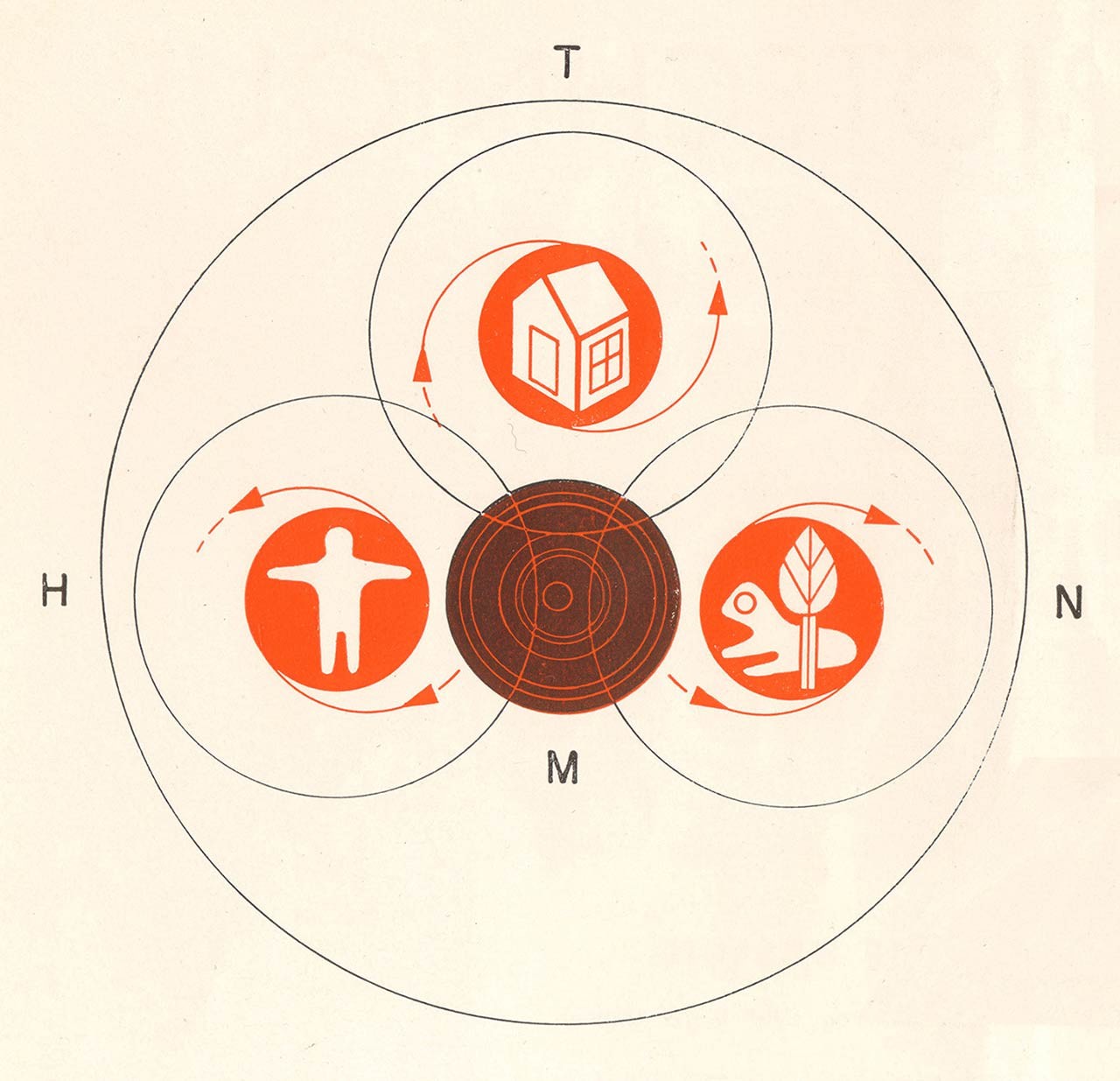 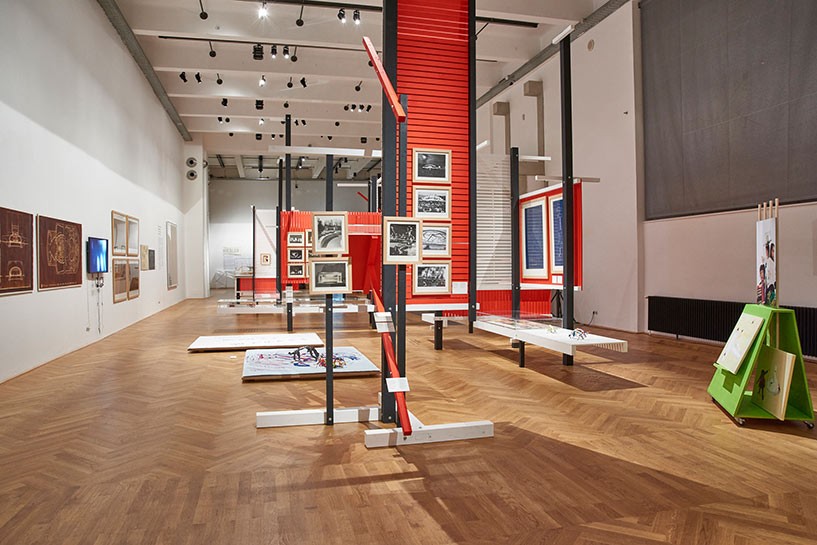 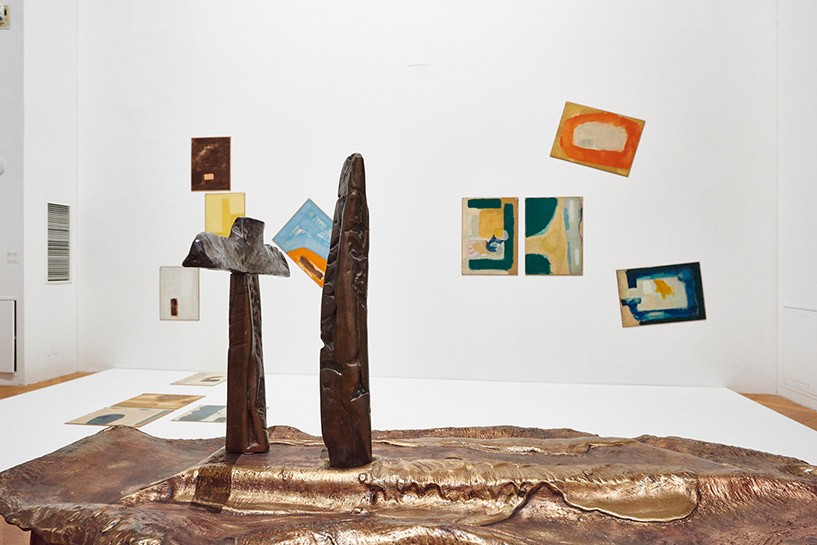 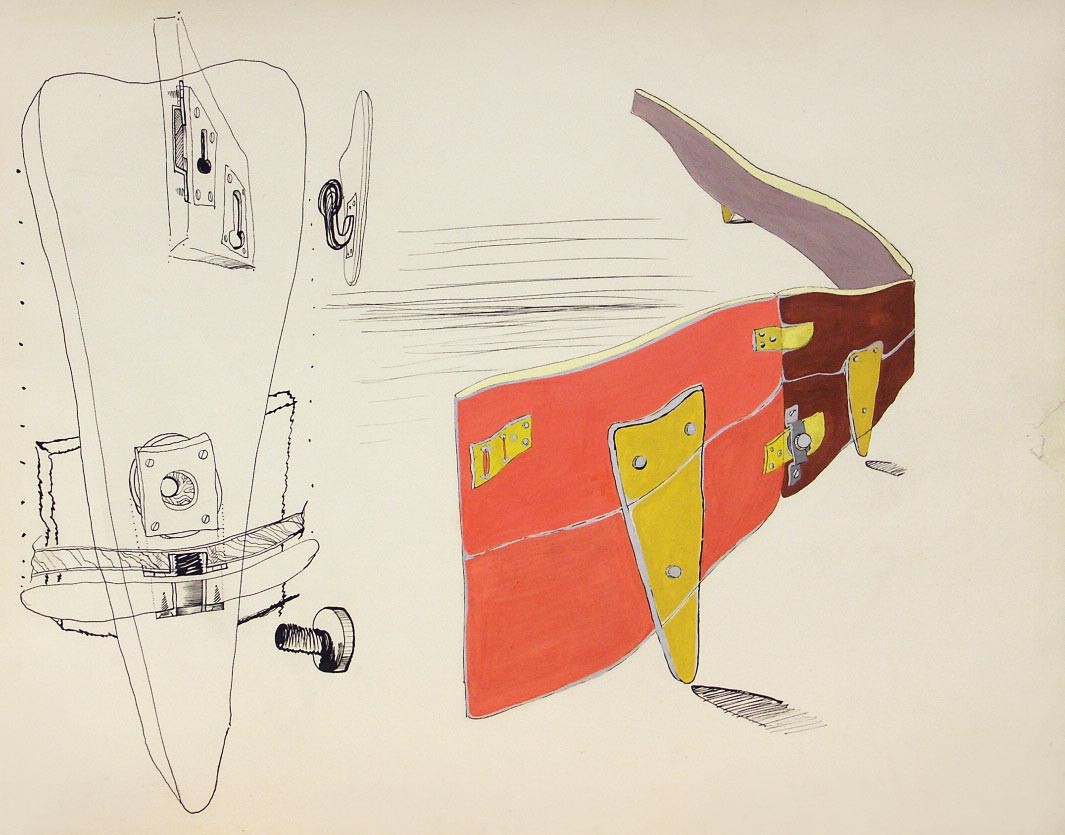 Frederick Kiesler, U. S. Housing in War and Peace
special exhibition in Moscow, study for the exhibition design, New York, 1944 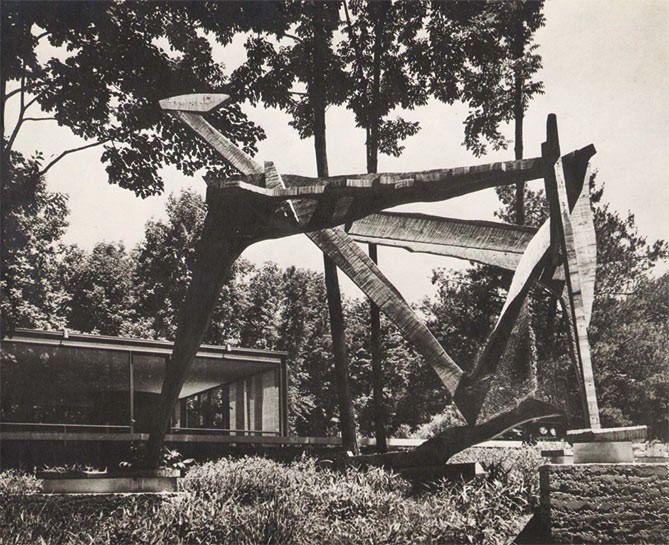 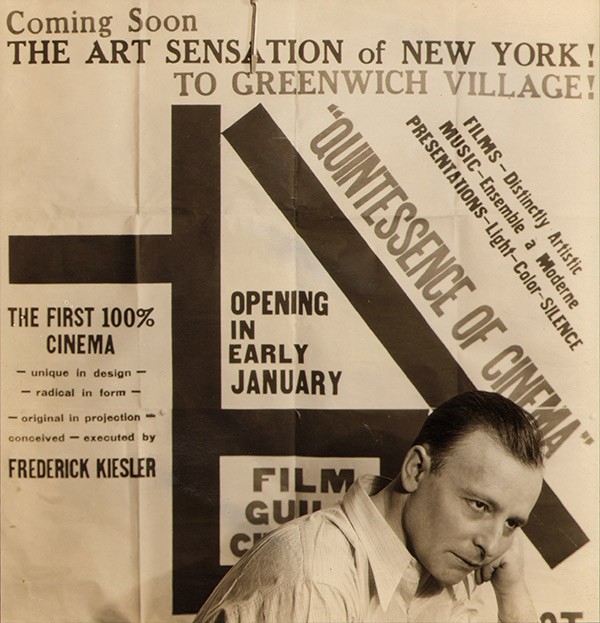 Frederick Kiesler in front of the placard for the opening of the Film Guild Cinema
New York, 1929/30