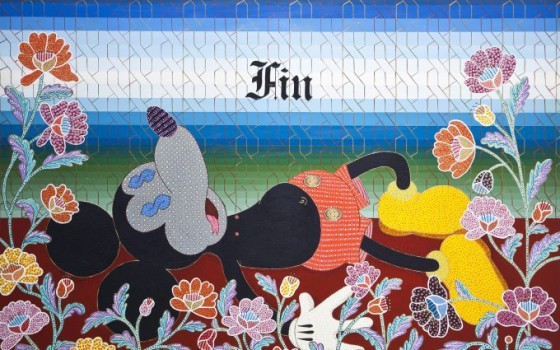 How to Read El Pato Pascual: Disney’s Latin America and Latin America’s Disney is a Pacific Standard Time: LA/LA exhibition of over 150 works by 48 Latin American artists who investigate and challenge nearly one hundred years of cultural influence between Latin America and Disney. Spanning painting, photography, graphic work, drawing, sculpture, video, documents, and the critical responses generated, the joint exhibition explores the idea that there are no clean boundaries between art, culture, and geography, and deconstructs how such notions are formed and disputed.

The exhibition’s curators, filmmaker/writer Jesse Lerner and artist Rubén Ortiz-Torres, thoroughly examined Disney’s long engagement with Latin American culture, from Donald Duck’s first featured role in the 1937 Mexican-themed short Don Donald to the company’s 2013 attempt to trademark the Day of the Dead. Lerner and Ortiz-Torres’s research further drew from a pivotal trip Walt Disney took with his team to South America in 1941. Along with a group of fifteen animators, musicians, and screenwriters, Disney flew to over five South American countries as part of a U.S. government-directed effort to promote the “Good Neighbor” policy during the Second World War. In addition to the celebrated film The Three Caballeros, this trip produced the feature Saludos Amigos; a “making of” documentary titled South of the Border with Disney; and propaganda films such as The Grain that Built a Hemisphere.

The infamous 1971 Chilean book by scholars Ariel Dorfman and Armand Mattelart, Para leer al Pato Donald (How to Read Donald Duck), was brought to Ortiz-Torres’s attention while studying with artist Michael Asher at the Disney-funded CalArts in the 1990s. The book (formerly banned in Chile and threatened by legal action in the U.S.) provides a structural analysis denouncing the ways in which Disney comic books were used as vehicles to justify and promote U.S. policies and cultural imperialism.
As curators, Lerner and Ortiz-Torres intend to show that Disney cannot be seen as something simply exported to the rest of the Americas, and passively received. Like any other cultural force or mythology in Latin America, Disney imagery has always been quickly reinterpreted, assimilated, adapted, cannibalized, syncretized, and subverted by artists: sculptor Nadín Ospina creates pre-Columbian-like objects portraying Disney characters using carved stone and gold; artist Enrique Chagoya juxtaposes imagery from codices, indigenous iconography, and popular graphics that include Disney characters in a postcolonial critique; Liliana Porter has produced conceptual graphics and photography where Disney toys are juxtaposed with recognizable figures such as Che Guevara. Photographs like Antonio Turok’s show how Disney iconography has been intertwined with daily life in Latin America. Arturo Herrera’s work plays with our almost innate ability to immediately recognize Disney characters, no matter how abstracted: the artist will present a new mural near the Schindler House, on the side of the West Elm building at 8366 Beverly Blvd, Los Angeles 90048, on view through the length of the exhibition.


ABOUT THE CURATORS
Jesse Lerner and Rubén Oritz-Torres each bring considerable knowledge to the exhibition project and publication. Both are artists and academics—teaching at Pitzer College and UC San Diego, respectively—whose work explores the boundaries of culture and art; their fields of expertise and methodologies, though distinct, complement each other and often overlap. They previously collaborated in the production of the film Frontierland and in curating MEX/LA, ‘Mexican’ Modernism(s) in Los Angeles 1930-1985 for the Museum of Latin American Art in Long Beach in 2011. Scholar Fabián Cereijido is the assistant curator of the exhibition.

Through a series of thematically linked exhibitions and programs, Pacific Standard Time: LA/LA highlights different aspects of Latin American and Latino art from the ancient world to the present day. With topics such as luxury arts in the pre-Columbian Americas, 20th century Afro-Brazilian art, alternative spaces in Mexico City, and boundary-crossing practices of Latino artists, exhibitions range from monographic studies of individual artists to broad surveys that cut across numerous countries.

Major support of this exhibition and publication is provided through grants from the Getty Foundation.

Generous support provided by the Andy Warhol Foundation for the Visual Arts, the National Endowment for the Arts, and the City of West Hollywood.