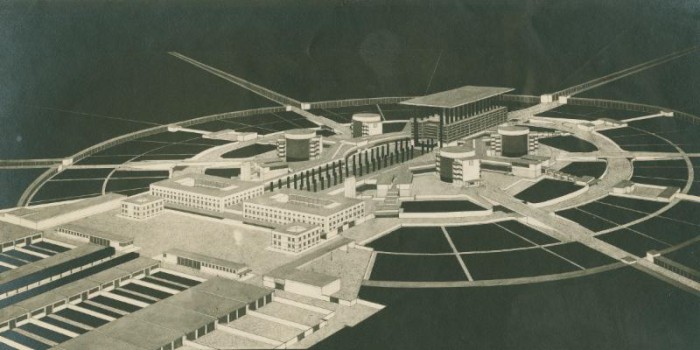 R.M. Schindler, Design for a cemetery and crematorium with a chapel

The MAK Center presents this exhibition exploring the intellectual climate in Vienna at the time of R.M. Schindler’s architectural training, and highlighting the trajectory connecting 19th century Europe with 20th century West Hollywood.

The Prequel contextualizes the landmark 1922 Kings Road House as a direct result of the debates playing out in Vienna Modernist circles from 1890–1914, when Schindler was a student and young practitioner. Through photographs, drawings, and furniture designs, the exhibition reviews the foundations laid by Otto Wagner, as well as the next generation responses to his work as personified by Adolf Loos and Josef Hoffmann.

The exhibition is divided into four sections: the first focuses on R.M. Schindler’s (1887–1953) Vienna years from 1887–1914. As a student, Schindler took up civil engineering before attending Otto Wagner’s special school of architecture at the Academy of Fine Arts. Rebelling against the revival styles of Historicism, architects around 1900 created buildings based on a unity of form and function. The development of new materials and building techniques allowed Schindler to move beyond structural forces as the inspiration for architectural form. Throughout his career, however, he engaged the Viennese imperative to reconcile interior and exterior environments. A special feature in this section is a selection of drawings from Schindler’s early professional years.

Otto Wagner (1841–1918) is the focus of the second section of The Prequel. His teachings emphasized the importance of the “utility style,” which took function as its impetus, rather than historical styles. Wagner felt the architect, who balanced idealism and realism, was the epitome of the modern man. He posited that architectural styles naturally evolve as technologies and lifestyles advance, and his modern point of view was reflected in notable works such as the Villa Wagner, Steinhof Church, and the Austrian Postal Savings Bank.

Although Adolf Loos (1870–1933) only realized three buildings in Schindler’s Vienna years, his ideas were well known through published articles and his designs for public spots such as the Café Museum and the American Bar. The exhibition focuses on these, along with the commercial Goldman & Salatsch Building and the Steiner and Scheu houses. Loos adapted a rationalist approach to Modernism– rather than foreground design, he preferred to let people’s individuality dominate an environment and derived spatial plans from the client’s needs. With his emphasis on space, Loos provided an important precedent for the young Schindler.

An advocate of the Gesamtkunstwerk, or total work of art, Josef Hoffmann (1870–1956) was a key figure of the Vienna Secession, along with Gustav Klimt and designer Koloman Moser. They denied any hierarchical distinction between fine and applied art and sought to create beautiful, integrated environments to counteract the negative effects of industrialization. In 1903, Hoffmann co-founded the Weiner Werkstätte, dedicated to the artistic design of everyday life. In buildings such as Sanatorium Westend and the Palais Stoclet, Hoffmann, as Schindler would soon do, began to divorce his designs from their structural elements, in favor of a spatial ambiguity.

R.M. Schindler: The Prequel is supported by the National Endowment for the Arts and the City of West Hollywood.
Exhibition design by a l m project.
Curator: Christian Witt-Dörring 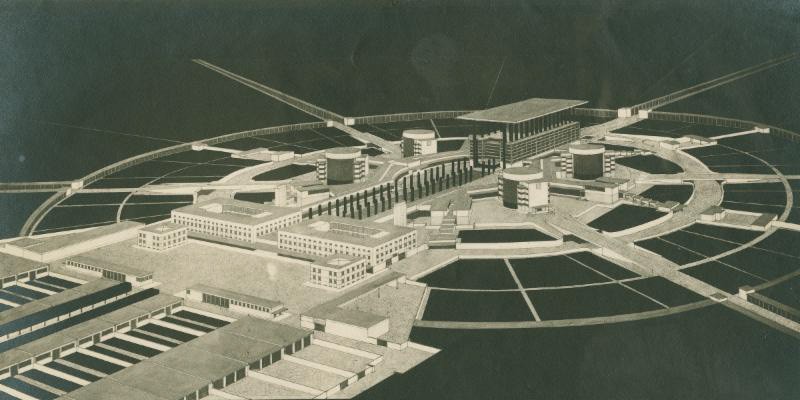 R.M. Schindler, Design for a cemetery and crematorium with a chapel
designed to accommodate for 5 million people, presented as his thesis project at the Academy of Fine Arts in Vienna (under the direction of Otto Wagner), 1912-13. Courtesy of R.M. Schindler papers, Architecture and Design Collection, Art, Design & Architecture Museum, UC Santa Barbara