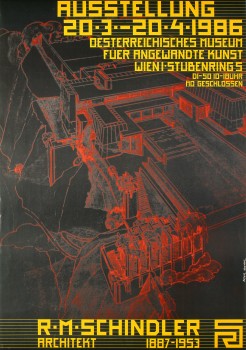 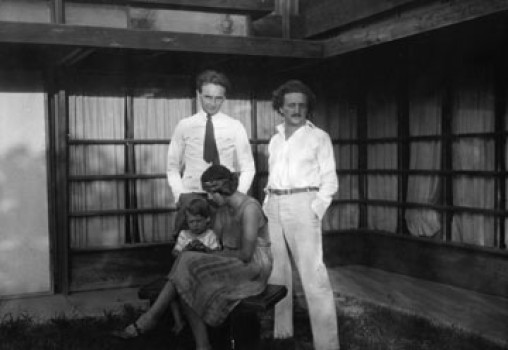 Since his emigration to the USA in 1914, the experimental Viennese visionary has given direction to a modern architectural percept in California. After completion of his own Kings Road house in 1921/22 designed as live-work space, Schindler primary planned and built private residencies, like the Mackey Apartments and the Fitzpatrick-Leland House.
Rudolph Michael Schindler was born in Vienna in 1887, and studied engineering and architecture there under modernist luminaries Otto Wagner and Adolf Loos. Inspired by Frank Lloyd Wright's 1910 Wasmuth Portfolio, he went to Chicago in 1914 and began to work for Wright in 1918. Wright sent him to Los Angeles in 1920 to supervise the construction of the Hollyhock House for Aline Barnsdall, and by 1921 Schindler had established his own practice in Los Angeles at his home and studio on North Kings Road. Over the course of his life, he realized 150 built works that challenged myriad architectural conventions and advanced his thesis of “space architecture.”

In an early manifesto, later published in an essay titled “Space Architecture,” Schindler wrote that the ambitions of the architect had always been “to gather and pile up masses of material and leave empty hollows for human use.” He argued that these interior spaces were nothing more than after-thoughts, and that to date, all efforts at form-making had amounted to merely carving up surfaces and decorating them. He proclaimed that the real medium of architecture was space, and that “architecture is being born in our time.” Due to innovations in engineering, materials, and methods, he argued that modern architects like himself were liberated to deal with space forms, and could treat space as a medium such as color, sound, or mass.

With this attitude, Schindler played a pivotal role in extending modernism beyond the orthodoxy of International Style. He was highly critical of the formulaic aspects of modernist conventions, investing instead in a process that combined intuition and pragmatism. He was not afraid to try new things: new ways of organizing space, of playing with geometry and tectonics, of using materials, and, in the case of his own house, new ways of programming domestic space. Each decade of his work looks different—he didn't feel compelled to maintain a signature look, but rather preferred to experiment with ideas.

In some ways he acted as much as a sculptor as an architect, making many design decisions on site, in real scale and with real materials. He was the first architect to be his own contractor, which also set him apart at a time when a belief in the strict separation between the roles of design and building was in full force. Ultimately he valued art over career and money, which both freed him to experiment at will and left him undervalued until well after his death in 1953.

The Californian branch of the MAK in Los Angeles
The MAK Center for Art and Architecture, Los Angeles, founded in 1994, is a contemporary, experimental, multi-disciplinary center for art and architecture and is based today in three of the most important houses by the Austrian-American architect Rudolph M. Schindler. The core of the programming includes the internationally sought-after MAK Artists and Architects-in-Residence Program, an annual residency program for emerging international artists and architects.

The Pearl M. Mackey Apartments (R.M. Schindler, 1939) in the Mid-Wilshire District of Los Angeles are home to the MAK Artists and Architects-in-Residence program MAK Artists and Architects in Residence Program]. The Republic of Austria purchased the building on the initiative of the MAK in 1995 and the program designed for visiting emerging international artists and architects was launched in the same year.