The Schindler House was designed and built by Austrian-American architect Rudolph M. Schindler in 1921/22 as a cooperative live/work space for two young couples. One of the earliest modern houses, it has influenced and inspired generations of architects worldwide. It redefined notions of public and private, and indoor and outdoor space; broke new ground in the design and construction of the modern dwelling; and became a site of forward-thinking aesthetic, cultural, and political activity throughout the 1920s­50s.

Rudolph M. Schindler's Studio-Residence was the first modern house to respond to the unique climate of California, and as such it served as the prototype for a distinctly Californian style of design. From 1922 until his death in 1953, the building functioned as Schindler's home and studio. During this 30-year period, Schindler designed houses and small commercial buildings that today are considered landmarks of the modern movement.

In his own house, Schindler expressed his philosophy about structure and materials most clearly, but the entire site explores the relationship of space, light, and form. In this, his first independent design in the U.S., Schindler set forth the basic tenets of his architectural philosophy, which he called "Space Architecture." In this masterwork, he established himself as a major figure in the history of the modern movement.

Rudolph Michael Schindler was born in 1887, in Vienna, Austria. He studied both art and architecture and was associated with Otto Wagner and Adolf Loos. In 1914, at the age of 26, Schindler left Austria for Chicago with a 3-year contract to work in a commercial architectural firm. At the expiration of the term, he accepted an offer from Frank Lloyd Wright to join his studio. Wright became Schindler's most important influence, and in 1920, he came to Los Angeles to supervise the construction of Wright's Hollyhock House.
In 1921, Schindler began his independent practice by designing his own house and studio. With his wife, Sophie Pauline Gibling (later known as Pauline), Schindler joined another couple, Clyde and Marian Chace, to build a cooperative dwelling for two couples with a guest unit. Loans of $5,000 from a bank and $3,000 from Pauline's parents enabled construction in 1922. Shortly after the completion of construction Pauline gave birth to the Schindlers' only child, Mark.

The Chaces departed for Florida in 1924 to pursue better financial prospects, but the Schindlers were joined by Richard Neutra and his family in 1925. Neutra, a former schoolmate of Schindler's from Vienna, soon became one of the most important modern architects in Los Angeles. Between 1926 and 1930 (when the Neutras moved on), Schindler and Neutra produced several significant contributions to early 20th-century architecture: Schindler's Lovell Beach House at Newport Beach (1925/26); their joint competition entry for the League of Nations Building (1926); and Neutra's Lovell "Health House" in Los Angeles (1928/29).

During this period, the lifestyle embodied in Schindler's design for his house was observed by the Schindler and Neutra families through diet and exercise, psychoanalysis, education, and the arts of music, dance, painting and photography. The outdoor courts were dining rooms and playrooms for their toddlers, who ran free under the sun year round. They slept in the open air, ate simple meals of fruits and vegetables by the fireplaces, and wore loose-fitting garments of natural fibers closed with ties rather than buttons. At their parties, the terraces served as stages for musical and dance performances; in the audiences were many aspiring California artists and writers.

By the end of the 1920s, Pauline Schindler had left with her son, only to return in the mid 1930s to live, separate from her former husband, in the Chace studios. Her death in 1977 coincided with the founding of the Friends of the Schindler House.

Undoubtedly the Schindler House has been one of the most influential designs of the 20th century, and its daring innovations became commonplace by the time of the architect's death. The California house—a one-story dwelling with an open floor plan and a flat roof, which opened to the garden through sliding doors while turning its back to the street—became the established norm of postwar housing. The Schindler House is now recognized nationally and internationally as a totally new beginning, a genuinely fresh start in architecture.

Each year the MAK Center greets a myriad of local, national, and international visitors intrigued by this early (1922) example of Los Angeles modernist architecture. They often ask detailed questions. They are curious about Schindler's thought process when designing and constructing the house; how the house has been used, understood, and canonized throughout the decades; and how the house is holding up today.

Inspired by these visitors' questions, the MAK Center, in collaboration with series initiator Sara Daleiden, developed Schindler Lab. Initiated in 2011, the initiative not only presented artistic projects that reframed the experience of the house, it also foregrounded the intricate process of discussion, debate, deliberation, and creative problem solving behind every Schindler House exhibition. That process is embodied in the online publication at SchindlerLab.org. / March 2015 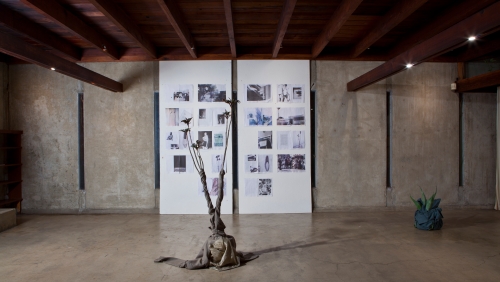 The Pearl M. Mackey Apartments (R.M. Schindler, 1939) in the Mid-Wilshire District of Los Angeles are home to the MAK Artists and Architects-in-Residence program MAK Artists and Architects in Residence Program]. The Republic of Austria purchased the building on the initiative of the MAK in 1995 and the program designed for visiting emerging international artists and architects was launched in the same year.

Since his emigration to the USA in 1914, the experimental Viennese visionary has given direction to a modern architectural percept in California. After completion of his own Kings Road house in 1921/22 designed as live-work space, Schindler primary planned and built private residencies, like the Mackey Apartments and the Fitzpatrick-Leland House.