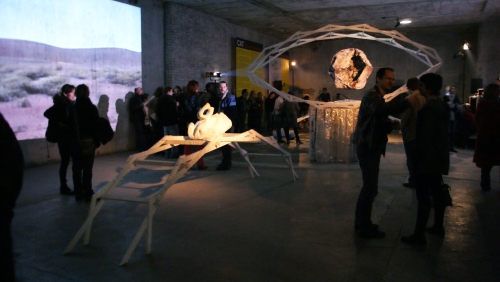 Experimental music legend Hans-Joachim Roedelius and his daughter, object artist Rosa Roedelius, will be joining the young Belgian DJ and musician DARKO* on 2 November to stage a unique collaborative project for the final CAT OPEN of 2010.

The installation meerraum [sea-space] makes a theme of various spatial
contexts’ interaction both at their interfaces and in their peripheral zones.
A border is always also an imaginary attribute: “it exists, and it doesn’t exist, just like the sea as a metaphor for infinite distance and depth,” says the artist, whose objects—which are often set up outdoors, such as on the island of Lanzarote— allude to the individual’s being subjected natural forces. Inside the Flak tower, Roedelius will lend focus to the space, to its curvature and coloration, while also focusing the visitor’s perception thereof. Her objets blancs (monochrome white sculptures) evoke both intentional and random associations and attributions, as well as figurative interpretations and narrative references.

The spherical musical intervention by Hans-Joachim Roedelius uses
interferences between overlapping sound sequences to throw up a “blanket of sound,” swelling and receding like waves, which will set the seemingly static object-situation in motion. Following his performance, Roedelius will join DARKO* in guiding the interaction of fifty years of electronic music. Both composers work at the interfaces between present-day developments, using reduction as the very means by which they advance into new territory. In his minimalist excursions into electronic sounds, DARKO* concentrates on so-called psychoactive frequencies which he extemporizes upon using “looped peaks,” ultimately achieving a unique degree of interactivity between listeners and the music.

In the event series CAT OPEN, which takes place as part of MAK NITE at the MAK Contemporary Art Depot in the Arenbergpark Flak Tower, artists are invited to confront the special space of the historic Flak tower location while at the same time being challenged to reflect upon the visionary idea of a constantly expanding and growing art location as has been planned for the CAT – Contemporary Art Tower project. 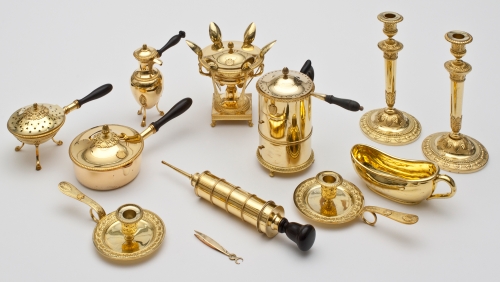 Curator: Anne-Katrin Rossberg
The holdings of the Metal Collection comprises objects from Europe and North America, dating from the fourteenth century to the present. From the very beginning, there existed a policy of acquiring contemporary works for the collection as well as historical objects. The collection covers diverse areas of the applied arts including small-scale sculpture, cutlery, clocks, jewellery, goldsmith’s art, lamps, astronomy devices and electro-plated reproductions.
Holíč Palace, Slovakia Holíč Palace, Slovakia 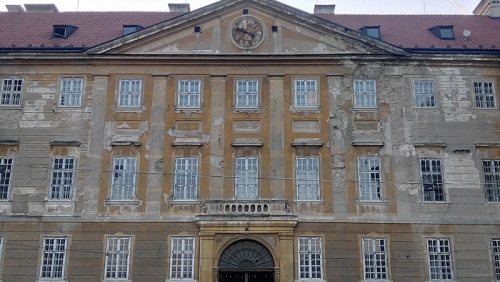 MAK on TOUR Day Trip by Bus incl. guided tour of the exhibition
Holíč Palace, Slovakia
Holíč Palace on the Morava River in western Slovakia was of particular importance for the Habsburgs and the manufacturing industry in the kingdom of Hungary, to which Holíč (German: Holitsch) belonged until 1918. Francis I, Holy Roman Emperor, bought the palace from the Hungarian count Josef Czobor, whose ostentatious lifestyle had led to his ruin, and established the Holitsch faience factory around 1743, which can be interpreted as the counterpart to Maria Theresa’s imperial porcelain manufactory in Vienna.

Holíč Palace was not only converted into the ostentatious favorite palace of the imperial couple, but also housed another secret from the time when it belonged to Count Josef Czobor—and his secret is what we intend to reveal during this trip. The palace itself has sadly fallen into ruin; nevertheless, we will have the unique opportunity to view it from the inside.

Program
8 a.m.   Meeting point: opposite Weiskirchnerstraße 3, bus parking space near the entrance to the Stadtpark, 1010 Vienna
Bus leaves for Holíč
10 a.m.   Guided tour of Holíč Palace
12 noon Lunch (not included in the price)
2 p.m.   Bus leaves for Vienna
ca. 4 p.m.   Arrival at the MAK, Weiskirchnerstraße 3, 1010 Vienna, followed by a
guided tour of the exhibition 300 YEARS OF THE VIENNA PORCELAIN MANUFACTORY

Please note:
A valid passport as well as flat, sturdy shoes and clothes that can get dirty are essential!