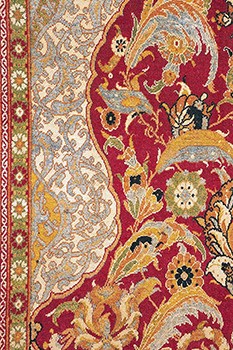 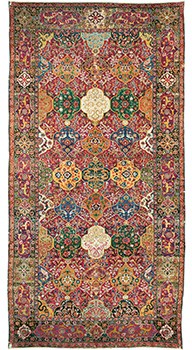 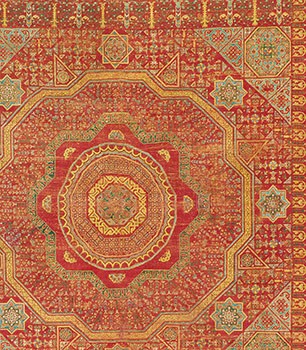 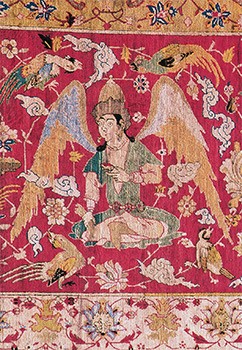 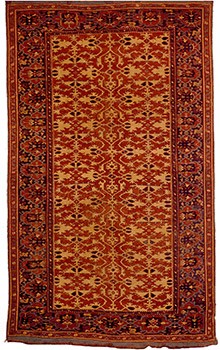 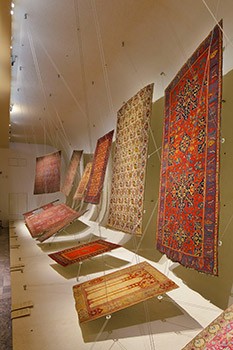 For the MAK’s 150th anniversary, designer Michael Embacher has given the Permanent Collection Carpets a new spatial concept that integrates an artistic intervention by Turkish artist Füsun Onur. This new presentation features the carpets of the MAK Collection as components of an intercultural dialog, as elements of exchange both within Asia and between Asia and Europe. Collection objects from the Ottoman and Safavid Empires are joined here by a selection of European pieces, and other objects from the arts-and-crafts sphere interrelate with the carpets from their respective regions of origin, serving to place them in a multilayered formal context and to underline their historical authenticity.

The MAK’s collection of carpets numbers among the three most important such collections worldwide. Its core is formed by classical output from the 16th and 17th centuries, during which the great Islamic realms of the Ottomans, Safavids, and Mughals experienced their golden ages. In addition to pieces from the Islamic world, the MAK is also home to a group of high-quality 18th-century carpets from the Savonnerie manufactory in France. Overall highlights include a unique silk Mamluk carpet, a Safavid hunting carpet, a carpet from Herat ornamented with spiraling tendrils, a figurative Indian piece from the era of Akbar, the Great, and the Savonnerie carpets of Emperor Josef II. The MAK’s collection came together less via systematic acquisitions and more due to the historically motivated integration of holdings, with each group originally having been compiled according to an independent set of criteria. The first carpet was purchased for the museum quite early on, in 1868—and by 1922, most of the items that comprise the present-day collection were already united beneath one roof. The most important ones were former imperial property.

The visualization of the closely interlinked geographic, stylistic, and cultural connections between Europe and both the Middle East and south-western Asia from the period between the 15th and 18th centuries is a central aspect of the display space’s curatorial reconception and redesign. In his architectural concept, Michael Embacher juxtaposes carpets of differing origins, highlighting their plasticity and fragility by using thin steel cables to weave them into his spectacular whole-room installation’s outer shell. Thus positioned at various heights, slightly tilted and turned, the individual objects seem to float within the space.

ARTISTIC INTERVENTION BY FÜSUN ONUR
Füsun Onur (*1938, Istanbul) gives rise here to a beguiling interplay between worlds of ideas, cultures, and religion. The artist has fashioned an ephemeral female angel who floats level with the gallery, presiding over the collected objects as if sent as an all-uniting or all-questioning sign. In so doing, Onur liberates the figure of the angel—a protagonist common to the scriptures of the Tanakh, the Old and New Testaments and the Koran—from preestablished notions of global and intellectual territories in a gesture that is both conceptual and poetic.
Curator: Bärbel Vischer, Curator, MAK Contemporary Art Collection

Ottoman Carpet (detail)
niche or prayer carpet
Ottoman Empire, Istanbul or Bursa, 2nd half 16th century, taken over from the Imperial Court in 1922

Mamluk Carpet
fragment
Mamluk Empire, Egypt, Cairo, after the 1st half 15th century, taken over from the Imperial Court in 1922