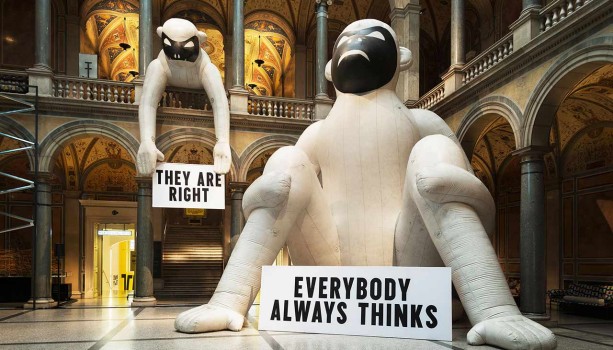 Everybody Always Thinks They Are Right, 2007. In collaboration with Monika Aichele, Matthias Ernstberger, and Sportogo. MAK Columned Main Hall 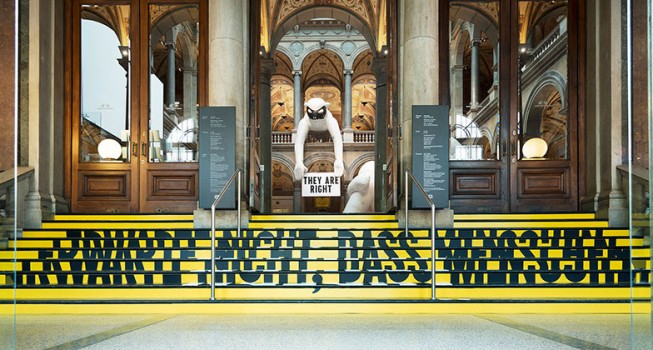 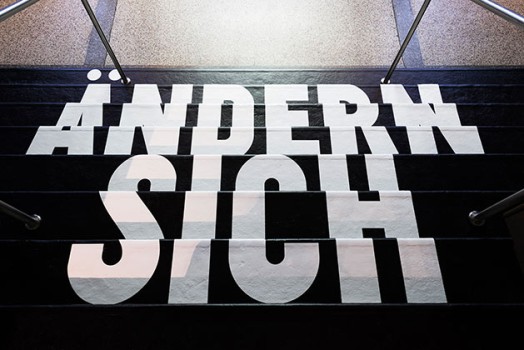 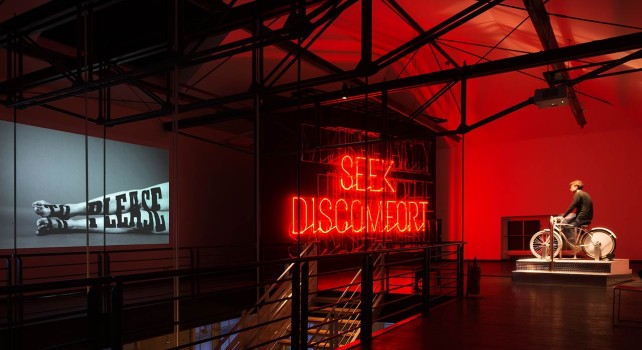 on the left: It Is Pretty Much Impossible to Please Everybody, Old Lady, 2012. In collaboration with Hillman Curtis, Ben Nabors, Marshall Stief, Anastasia Durasova, and Jessica Walsh
on the right: Actually Doing the Things I Set Out to Do Increases My Overall Level of Satisfaction, 2012. Execution: Kevin O’Callahan. MAK Permanent Collection Contemporary Art 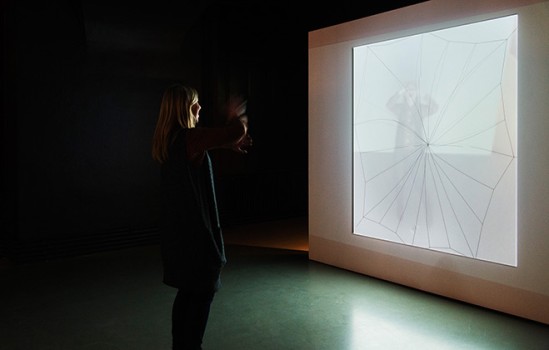 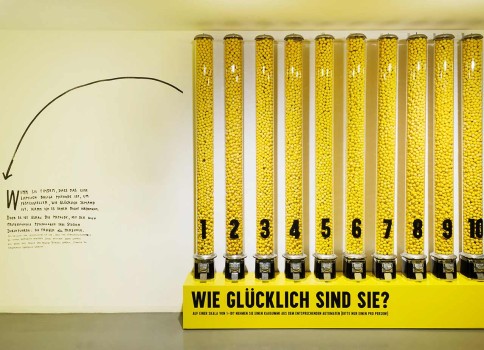 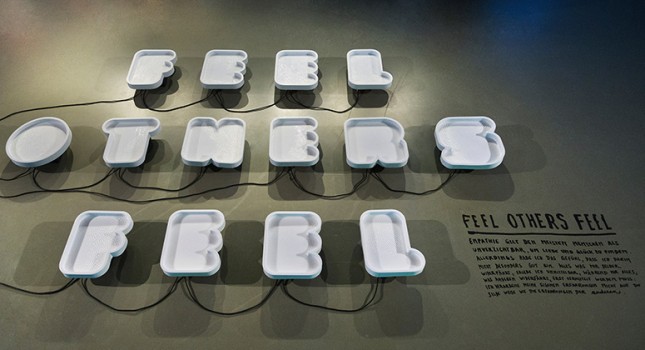 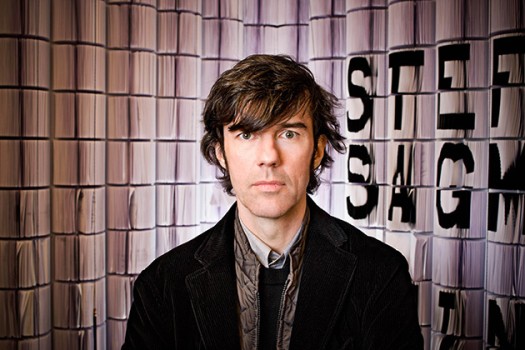 In The Happy Show, Stefan Sagmeister, the “grand master of graphic design,” explores and transcends the boundaries between art and design. The exhibition documents his ten years of ongoing investigation into happiness with the aid of videos, prints, infographics, sculptures, and interactive installations. It takes visitors on a journey through the designer’s way of thinking and his attempts to increase his own happiness by training his mind as others train their bodies. The Happy Show, which stretches across corridors, staircases, and even includes the museum’s “spaces in between,” is Sagmeister’s second exhibition at the MAK since 2002. In handwritten commentaries on the museum’s walls, bannisters, and bathrooms, Sagmeister elucidates his thoughts and motives for the projects on show. He supplements these personal notes with facts from social science by the psychologists Daniel Gilbert, Steven Pinker, and Jonathan Haidt, the anthropologist Donald Symons, and important historians, to contextualize his experiments with mind and typography. This inspiring presentation shows the designer’s experiences during a three-month experiment with meditation, cognitive therapy, and mood-altering medication.

The exhibition is accompanied by the publication THE HAPPY FILM. STEFAN SAGMEISTER, edited by the Institute of Contemporary Art, University of Pennsylvania, English, 239 pages with numerous color illustrations, Philadelphia PA 2012.
STEFAN SAGMEISTER: The Happy Show is organized by the Institute of Contemporary Art, University of Pennsylvania and is curated by former ICA Director Claudia Gould, currently Helen Goldsmith Menschel Director, The Jewish Museum, New York. The exhibition is coordinated at ICA by associate curator Anthony Elms. Stefan Sagmeister extends special thanks to Jessica Walsh and the entire team at Sagmeister Inc.; Ben Wolf, Ben Nabors, and Hillman Curtis of The Happy Film; and Kevin O’Callahan.

Stefan Sagmeister. The designer (b. 1962 Bregenz, Austria; lives and works in New York) blends typography and imagery
in striking, fresh, ambitious, and unsettling ways. Sagmeister moved to New York in 1993 and worked briefly for the influential designer Tibor Kalman’s M&Co. before starting his own firm, Sagmeister Inc. Having profoundly influenced the culture of design over the past decade, he is perhaps best known for his album covers for Talking Heads, David Byrne, Lou Reed, OK Go, and The Rolling Stones, to name only a few, and innovative public campaigns for companies like HBO and Levi’s, which have entered the public consciousness. He is the recipient of many awards, including two Grammys for his album designs, the Lucky Strike Designer Award, and the Communications Award from the Cooper-Hewitt National Design Museum. Jessica Walsh has been a partner of the Sagmeister & Walsh studio since 2012.

Happiness
Stefan Sagmeister will explore the possibilities of achieving happiness as a person and as a designer, his tactics to make sure his work remains a calling without deteriorating into a chore, as well as the chances to design pieces that induce happiness in the audience. Lots of clips from his upcoming documentary feature, The Happy Film, will be shown.
Mon, 26 Oct 2015, 4 p.m. (as part of MAK DAY – Open House at the MAK, admission free)

Thu, 29 Oct 2015, 5 p.m., with Kathrin Pokorny-Nagel, Head of the MAK Library and Works on Paper Collection/Archive

Sun, 7 Feb 2016, 4 p.m.
Can we train our minds to be happier?
Interactive guided tour of the exhibition with Psychoanalyst August Ruhs

The Happy Show documents Stefan Sagmeister’s exploration of happiness. This inspiring show takes visitors on a journey through the designer’s mind as he attempts to increase his happiness, training his mind as others train their bodies. The psychoanalyst August Ruhs joins us as we consider this topic.

“Don’t expect people to change,” is the first statement in the exhibition STEFAN SAGMEISTER: The Happy Show. What role do human relationships play in our happiness? The psychotherapist Gerti Senger joins us to discuss this question.

Sat, 26 Mar 2016, 2–4 p.m.
Happy Easter
What colors, color combinations, or motifs induce feelings of happiness in you? What does not make you happy at all? We will build a worry-gobbler box and lock away in it all the things that make us unhappy.

Sun, 15 Nov 2015, 11 a.m.
Happy Show
Stefan Sagmeister is a famous graphic artist who spends a lot of time thinking about being happy. With MINI MAK, we’ll visit his exhibition The Happy Show. Do you like his amusing ideas?

Sun, 6, 13 and 20 Dec 2015, 11 a.m.
Merry Advent
What makes you happy? With MINI MAK we’ll find out. Together we’ll create an unusual Christmas card with unusual materials and mail it in an unusual way. Have you ever “drawn” with cookies, laid ornaments with mandarin oranges, written words with flowers, or built with pencils? This year you can spread extra joy with the merriest cards.

Sun, 27 Mar 2016, 11 a.m.
Happy Easter
Stefan Sagmeister is a famous graphic artist who spends a lot of time thinking about being happy. With MINI MAK, we’ll visit his exhibition The Happy Show. Do you like his amusing ideas?

Design: Stefan Sagmeister, 2011/2013
In his last letter to J. & L. Lobmeyr, written in 1931, Adolf Loos suggested alternative finishes for the bases of his drinking set. “Butterfly, flies, naked human figures, small animals, etc.” were what the purist wanted to have engraved onto the base. To mark the 80th year since this classic bar range was invented, J. & L. Lobmeyr commissioned Stefan Sagmeister to develop this idea further. Bearing images of the seven deadly sins and the seven heavenly virtues, the tumblers will certainly be a major talking point either at table or at a cocktail party. This unusual glassware is available in the MAK Design Shop throughout the duration of the exhibition.

The motifs are painted by hand and coated with a layer of black or white enamel. The motifs were completely reworked by Stefan Sagmeister in 2013. Lead-free crystal glass, hand-cut and hand-polished
Ø 77 mm, H 92 mm


The exhibition in Vienna was made possible by the Sponsoring VALUE program of Erste Bank.

ICA is grateful for primary sponsorship from The Pew Center for Arts & Heritage. Additional support provided by The Chodorow Exhibition lnitiative Fund; The Horace W. Goldsmith Foundation; The Dietrich Foundation, Inc.; the Overseers Board for the Institute of Contemporary Art; friends and members of ICA; and the University of Pennsylvania (as of 1 March 2014). 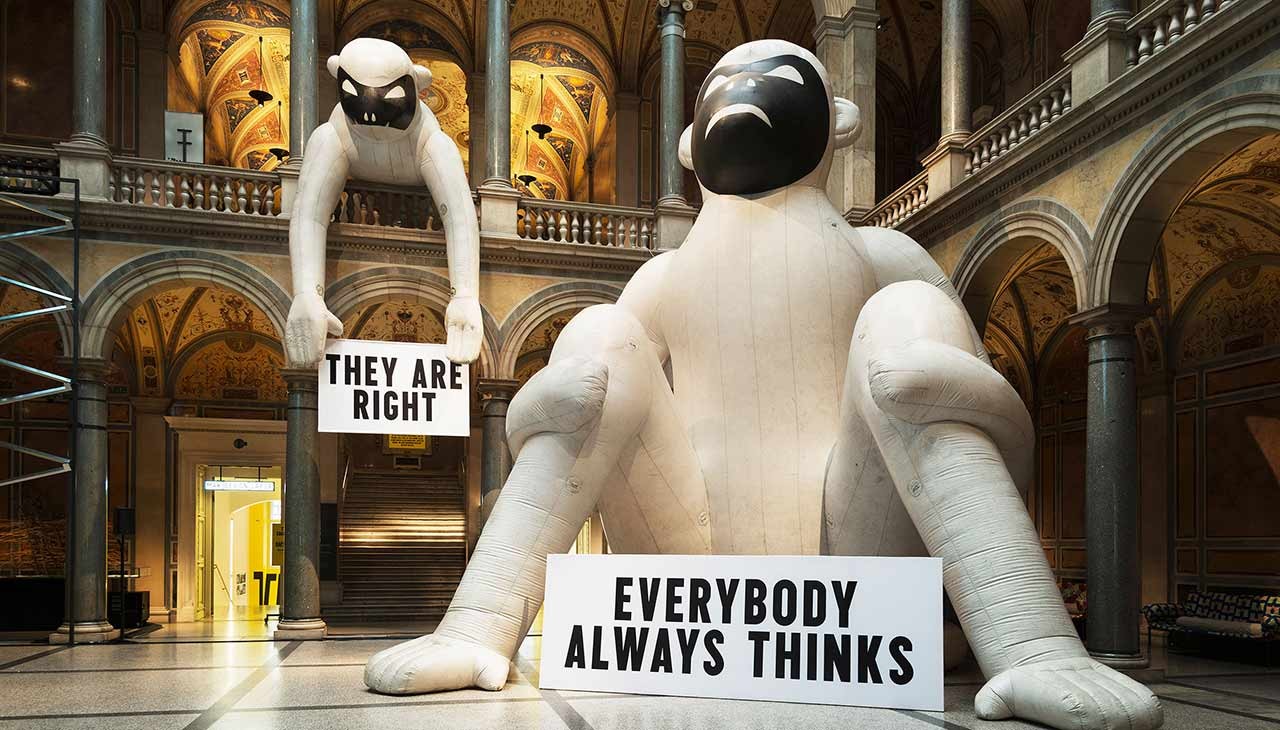 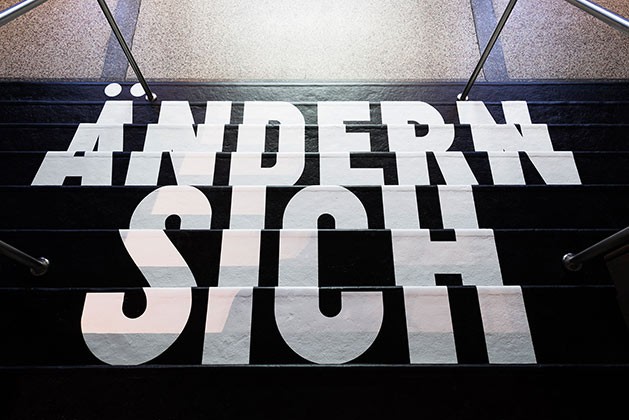 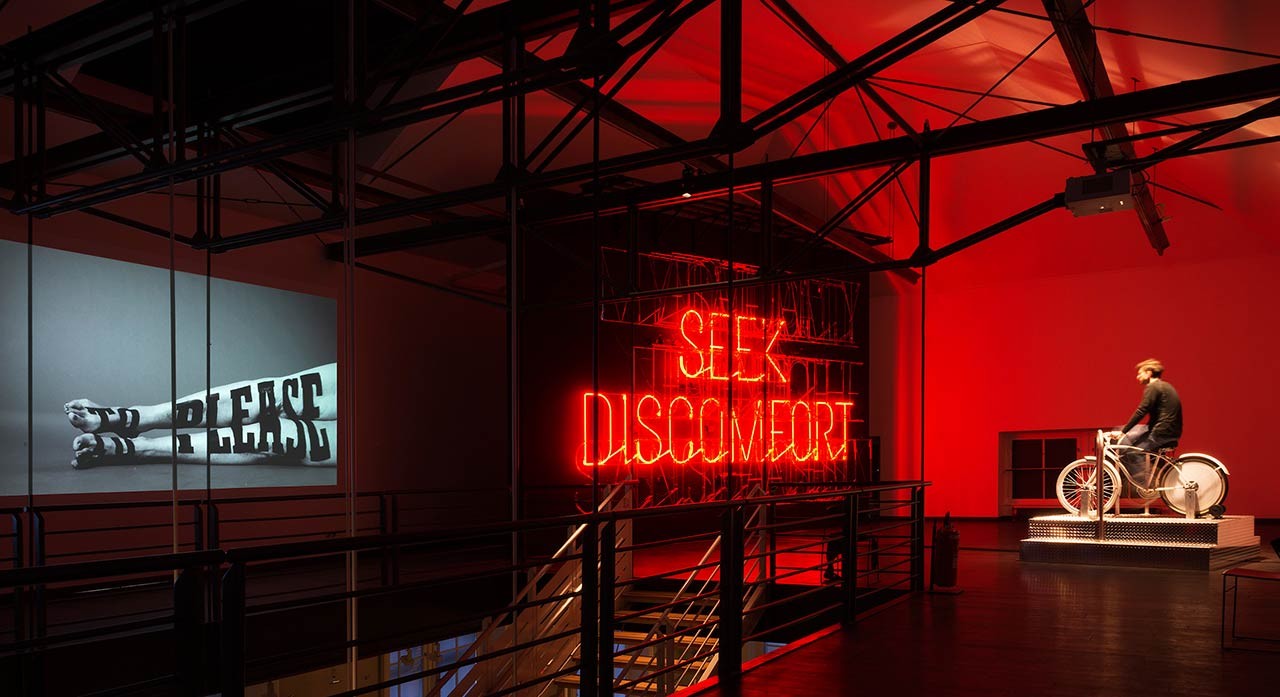 Exhibition view
on the left: It Is Pretty Much Impossible to Please Everybody, Old Lady, 2012. In collaboration with Hillman Curtis, Ben Nabors, Marshall Stief, Anastasia Durasova, and Jessica Walsh
on the right: Actually Doing the Things I Set Out to Do Increases My Overall Level of Satisfaction, 2012. Execution: Kevin O’Callahan. MAK Permanent Collection Contemporary Art 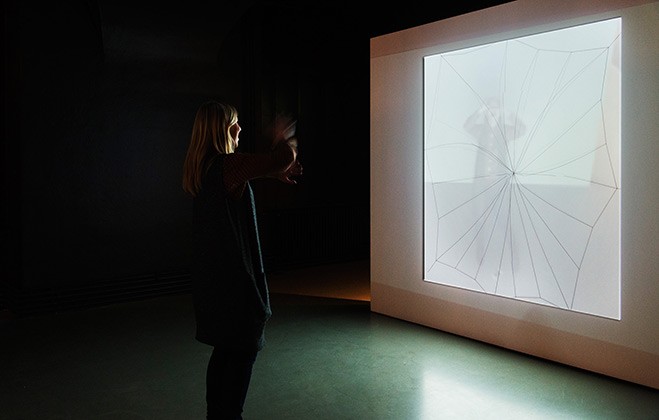 Exhibtion view
Being Not Truthful Always Works against Me, 2006. In collaboration with Ralph Ammer. 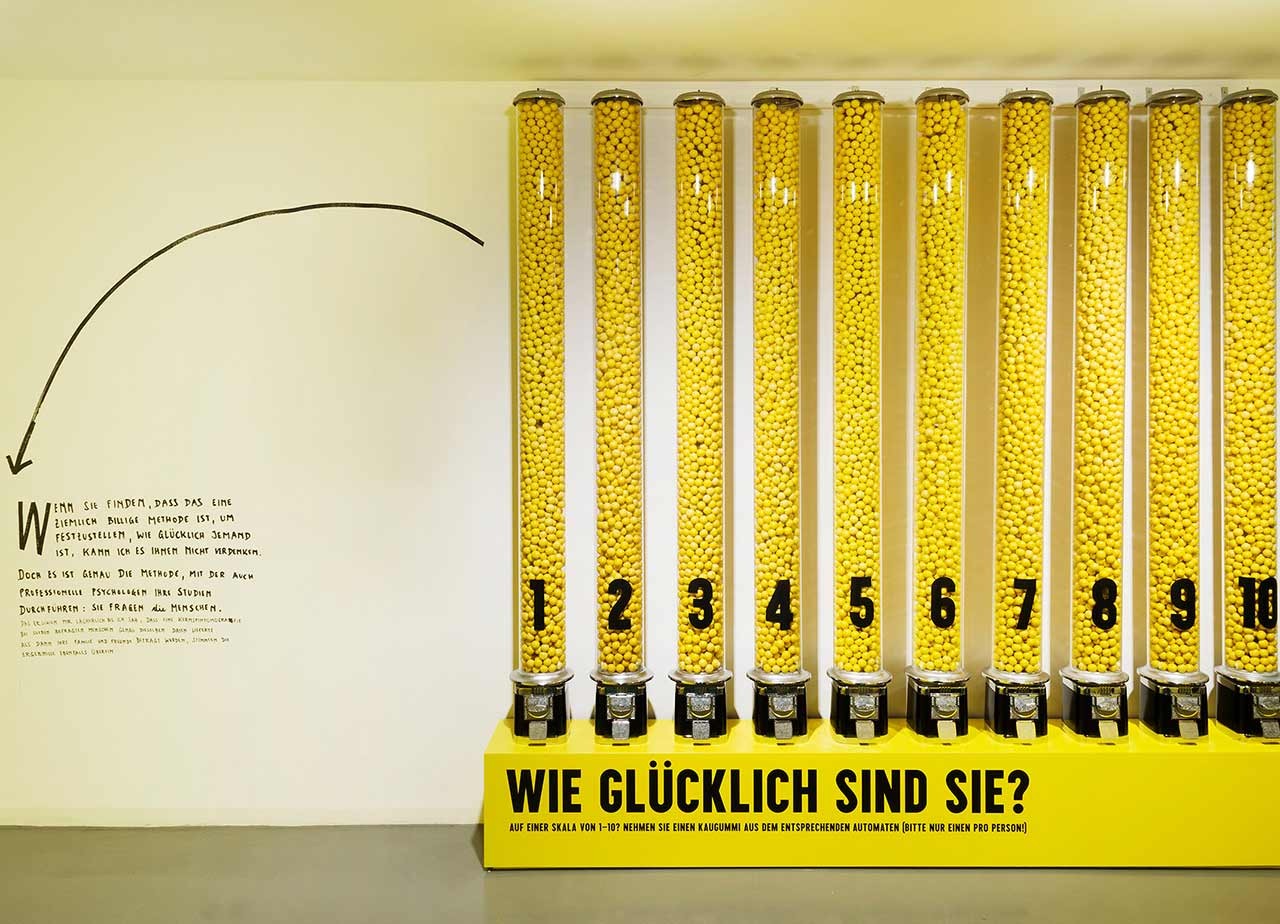 Exhibition view
How happy are you? 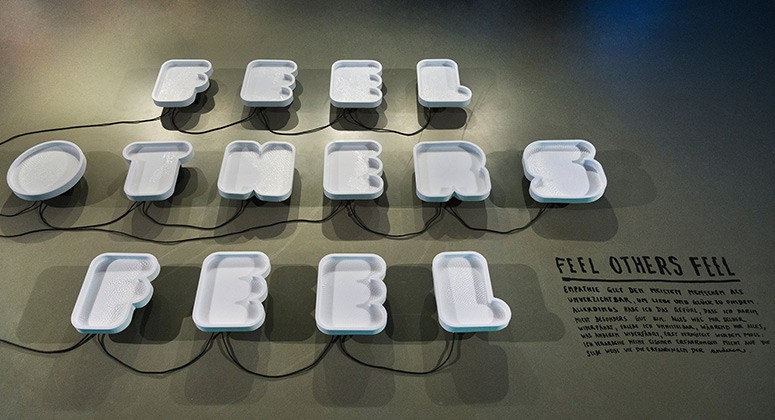 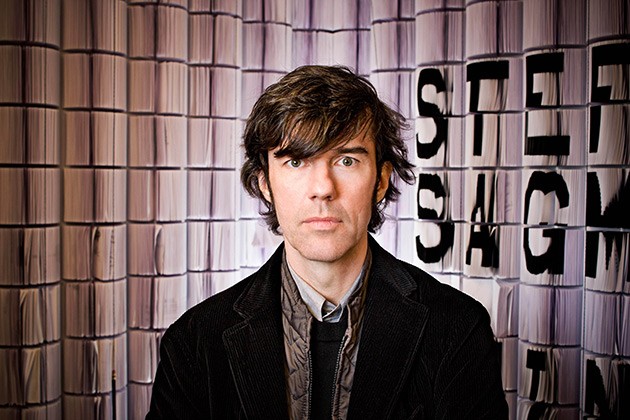