At the MAK Branch Geymüllerschlössel, a jewel of Biedermeier architecture in Vienna’s Pötzleinsdorf neighborhood, the MAK shows furniture from the Empire and Biedermeier periods, old Viennese clocks from the collection of Franz Sobek, and interventions by contemporary artists and designers. 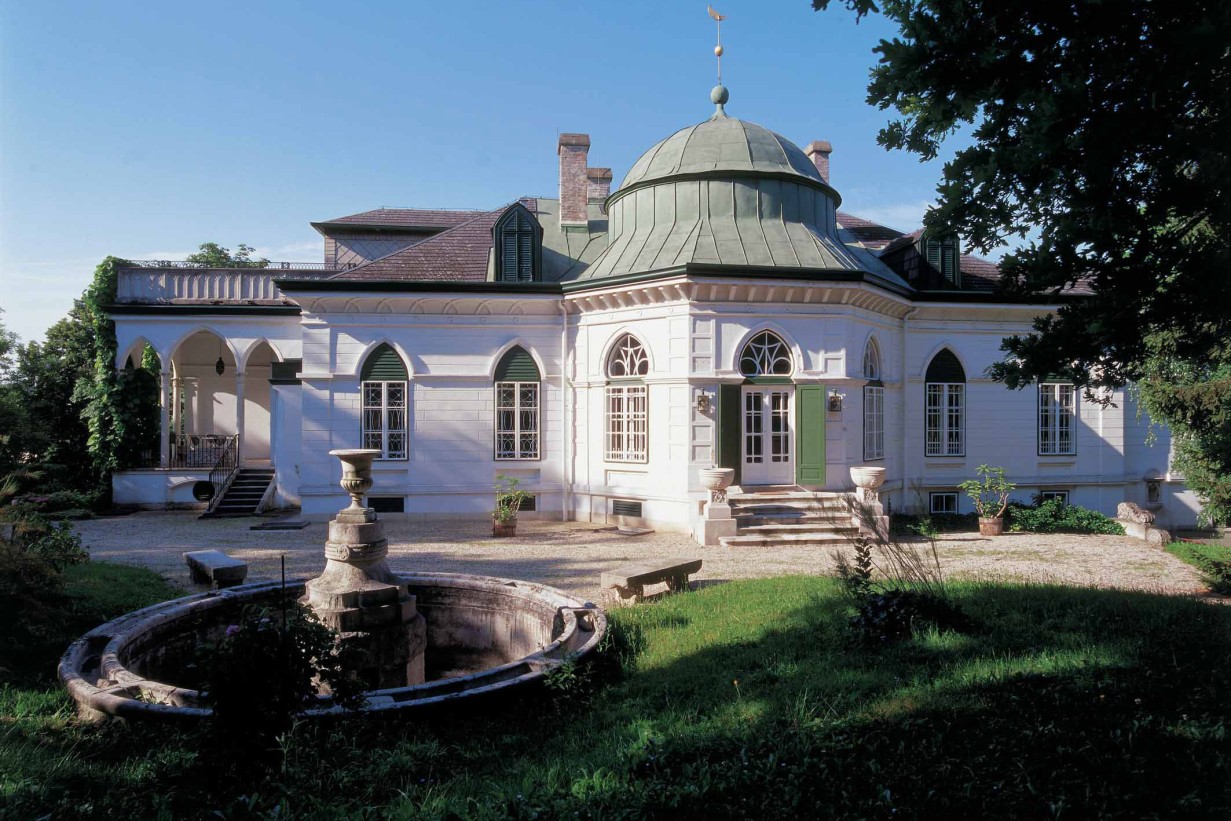 The Geymüllerschlössel in Pötzleinsdorf, a neighborhood in Vienna’s suburban outskirts, was put up after 1808 as a “summer building” for the Viennese merchant and banker Johann Jakob Geymüller (1760–1834). Today, it is one of the few places in Austria offering an authentically original look at the diversity of Biedermeier decorative art.
Furnished with original furniture from the first half of the 19th century, the Geymüllerschlössel joins its park, in which contemporary artistic stances are presented, to form an ensemble in which nature and art, as well as historical and contemporary artistic stances, enter into dialog with one another: in 1997, Hubert Schmalix’ sculpture Der Vater weist dem Kind den Weg [The Father Shows the Way to His Child] (1996) was set up in the Geymüllerschlössel’s park, and autumn 2004 saw the permanent addition of the skyspace work The other Horizon (1998/2004) by American artist James Turrell.

More about the GeymüllerschlösselVirtual Tour 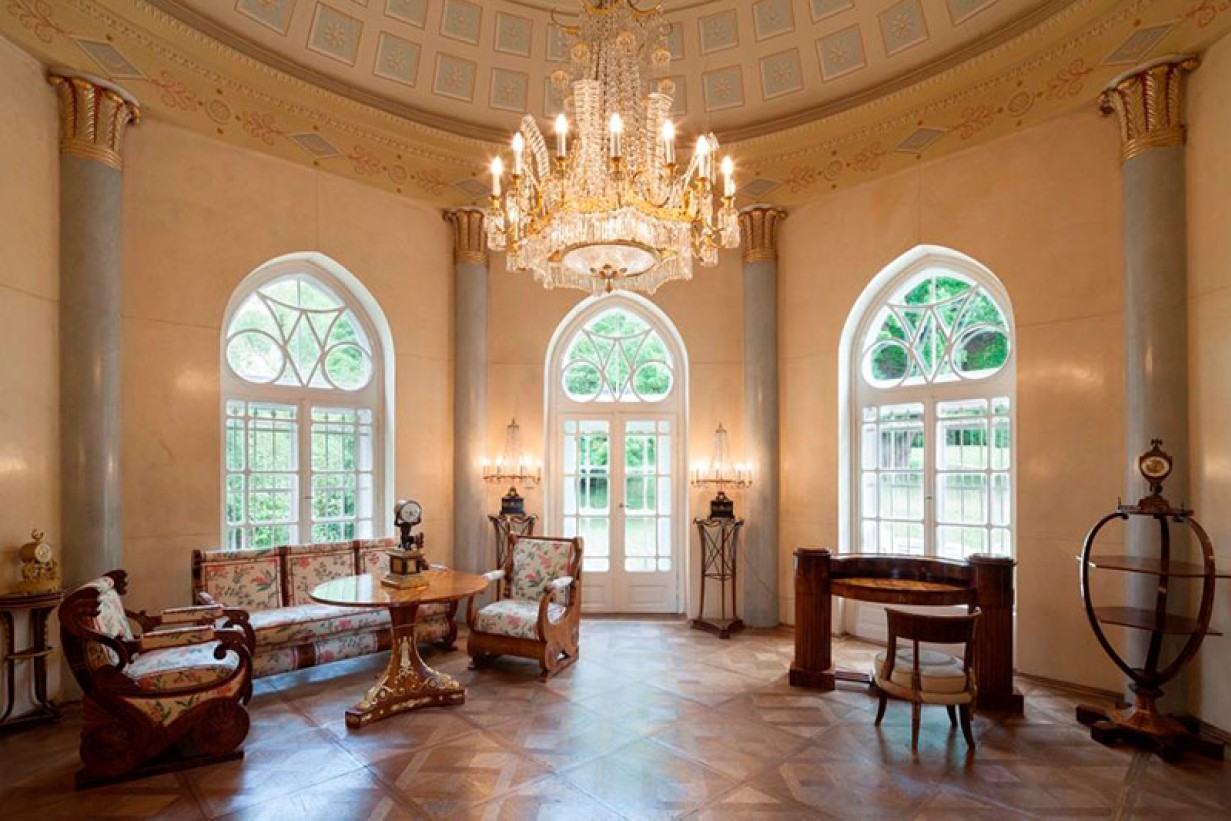 With MAK Annual Ticket
Under 19
Free entry to the park and to James Turrell’s skyspace.

Parking available, no barrier-free access to the building at this time. 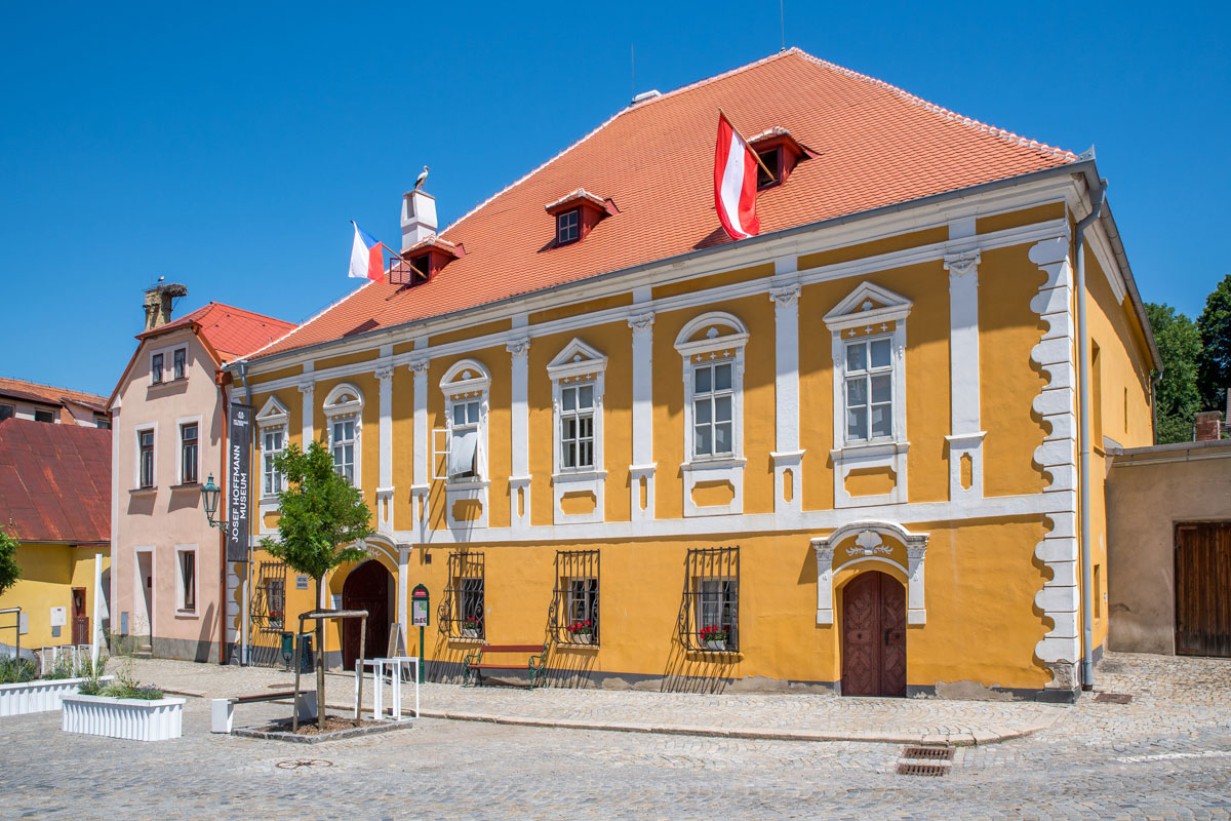 Born in Brtnice/Pirnitz, Moravia, in 1870, Josef Hoffmann remained attached to the place of his birth until after World War II. After his parents died in 1907, he refurnished the building in which he had been born, a Baroque town house in the main square of the town, as a summer residence for himself and his sisters. The changes comprised a rearrangement of his parents’ surviving late-Biedermeier household goods and template-based wall decorations as well as wooden décor and furniture additions after Hoffmann’s designs for the Wiener Werkstätte. When refurbishing the house, the architect used his parents’ home as an experimental arena for his design ideas. In 1911, Hoffmann dedicated a contribution to the magazine Das Interieur to his parental home.
After the house had been confiscated in 1945, it was used by the local authorities, ultimately as the town library. After the MAK exhibition Der barocke Hoffmann (Hoffmann as a Baroque Artist, 1992), which presented designs and objects by Josef Hoffmann in the Czech Republic again for the first time, plans for the restoration of the building were made which encompassed the reconstruction of the wall decorations. Since the completion of restoration work in 2004, the interiors of the Muzeum Rodný dům Josefa Hoffmanna have conveyed an idea of the spatial effect Josef Hoffmann desired and of his definition of a modern native style informed by the import of the Wiener Werkstätte, on which he had a decisive influence.
The Josef Hoffmann Museum, situated in the house where the artist was born, is located in Brtnice, Czech Republic and has been run as a joint branch by the Moravian Gallery in Brno and the MAK in Vienna since 2006.
More about the Josef Hoffmann Museum

© Kamil Till
Previous Image
Next Image

The MAK Center for Art and Architecture, Los Angeles, founded in 1994, is a contemporary, experimental, multi-disciplinary center for art and architecture and is based today in three of the most important houses by the Austrian-American architect Rudolph M. Schindler.

The Schindler House was designed and built by Austrian-American architect Rudolph M. Schindler in 1921/22 as a cooperative live/work space for two young couples. One of the earliest modern houses, it has influenced and inspired generations of architects worldwide. It redefined notions of public and private, and indoor and outdoor space; broke new ground in the design and construction of the modern dwelling; and became a site of forward-thinking aesthetic, cultural, and political activity throughout the 1920s­50s.

Located on a flat lot in a residential neighborhood, the originally four-unit (since converted to five) apartment building is one of a series of residential projects built by Schindler in the 1930s. Unlike international-style architects, Schindler seldom designed identical apartment units; his apartments are as complex, individual, and innovative as his houses. The Pearl M. Mackey Apartments possess typical Schindler characteristics: compact apartment layout, exceptional incorporation of natural light, built-in furniture, variable ceiling heights, and private outdoor gardens or mini-balconies.

After a major renovation, the  Fitzpatrick-Leland House was generously donated to the MAK Center in 2007. It first served as a base for the MAK Center’s Urban Future Initiative (UFI), a two-year exchange for cultural thinkers from diverse nations to cultivate visionary conceptions of urban space (this fellowship program was funded by the US Department of State with $ 410,000). Since then, the Center has dedicated the house to small-scale events and the lodging of international cultural researchers visiting Los Angeles for artistic and scholarly pursuits.

It is the mission of the MAK Center to continue the conversation initiated by Schindler by generating local, national, and international projects that explore experimental ideas in modern and contemporary art and architecture. Programming includes exhibitions, lectures, symposia, performances, film screenings, concerts, publication projects, and site-specific new work commissions, often developed with guest curators, artists, and architects. Through interactive dialogue in response to shifts in discussion and practice within the arts and architecture, the MAK Center serves as a vehicle through which ideas are continuously tested and considered by a fluent and engaged audience.

A core program of the MAK Center is the international  MAK Artists and Architects-in-Residence Program housed at the Mackey Apartments in the Mid-Wilshire District of Los Angeles. Each year the Center offers two six-month residencies to a total of eight artists and architects from around the world, selected by a high-profile jury convened in Vienna. Resident artists and architects live and work in the renovated apartments, and conceptualize, compete, and present projects at the MAK Center in biannual exhibitions in March and September.

More about the MAK Center 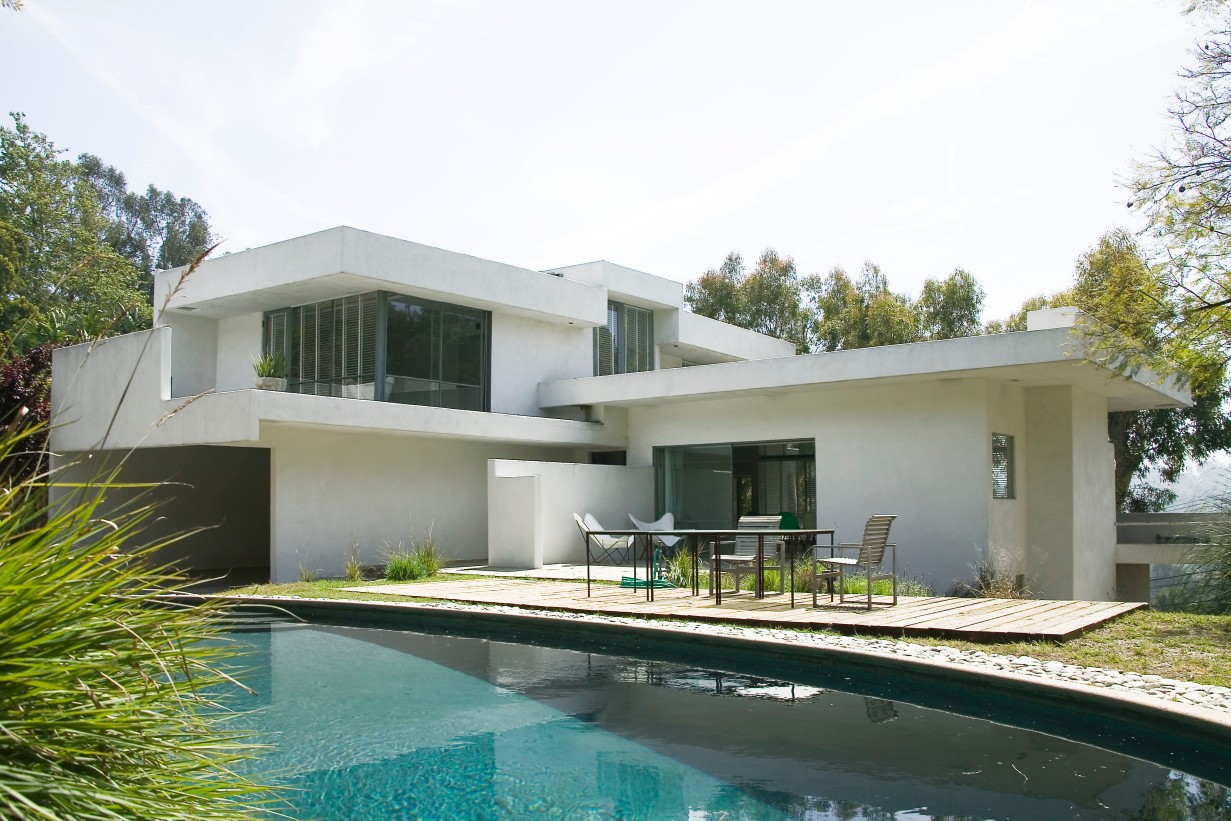 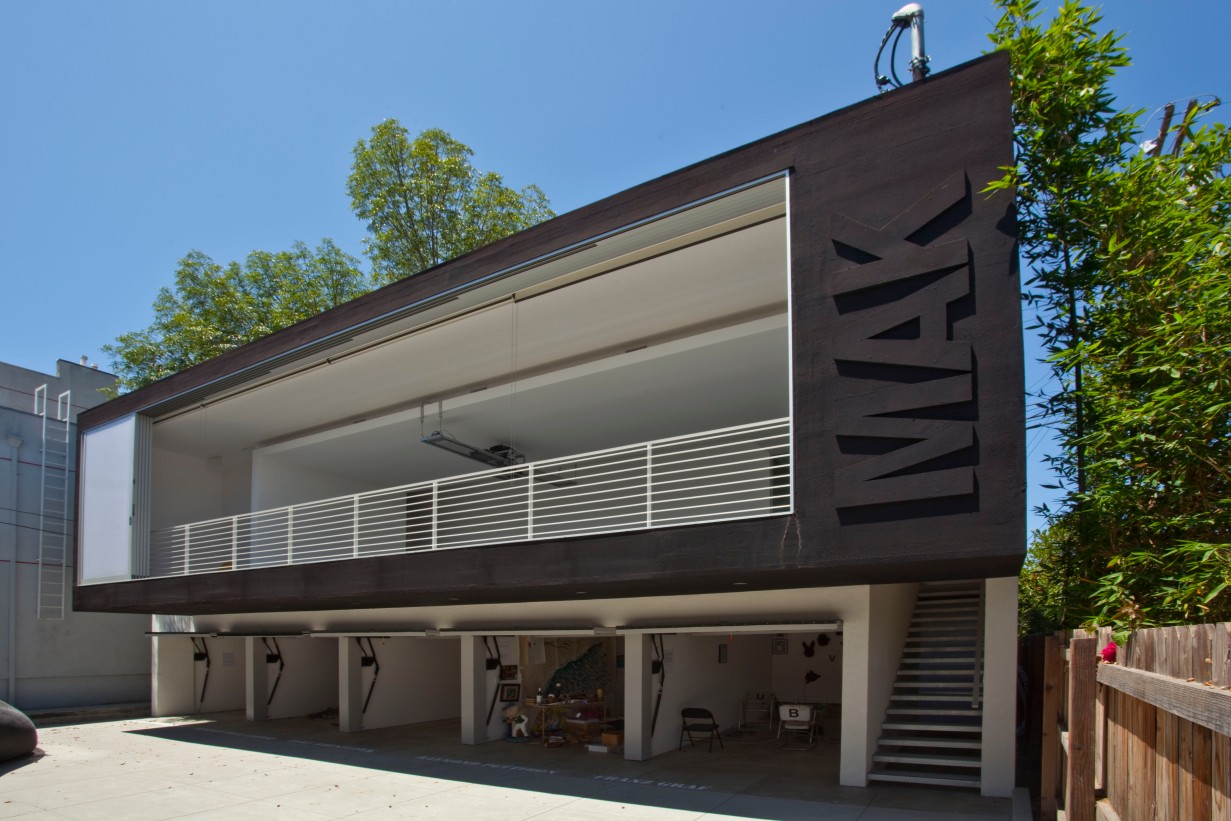 The MAK Contemporary Art Depot at the Arenbergpark (MAK Tower) is closed to the public due to a lack of official approval. We kindly ask for your understanding. 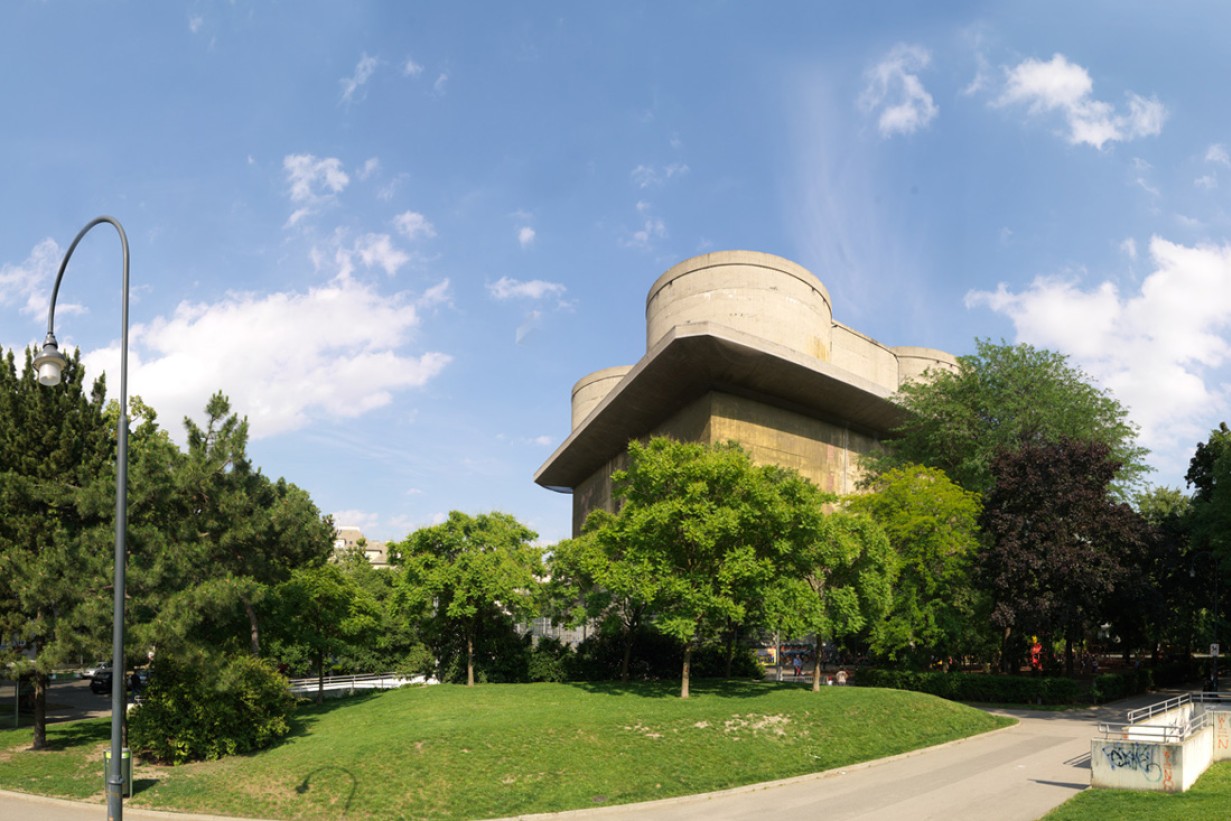 The focus that the MAK Contemporary Art Collection places on cutting-edge art and architecture is reflected in the idea that architecture provides a framework for contemporary art. Exploring the function and significance of architecture is a standard subject of visual art.
Built in World War II under the Nazi regime, the flak or combat tower dominates, together with the neighboring command tower, the cityscape around Arenbergpark. The altogether six air defense towers, which can not be demolished due to their situation in densely built-up urban areas, are among the biggest blockhouse buildings worldwide. Today, the monolithic reinforced-concrete constructions are landmarked historical memorials. The towers were planned as self-sufficient architectural structures and also served as air-raid shelters and hospital for the civilian population.
Since 1995, the MAK Tower, formerly the MAK Depot of Contemporary Art, has been one of the MAK’s branch museums and was used until 2011 as a repository of the MAK Contemporary Art Collection, partly accessible to the public, as well as for events in the areas of visual art and architecture. Expansive installations by Brigitte Kowanz, Atelier Van Lieshout, or Ilya & Emilia Kabakov connect to the irremovable memory of the site, outlining different approaches in coming to terms with history from a visual art perspective.
The MAK Tower is currently closed to the public due to a lack of official approval. We kindly ask for your understanding.

MAK Tower
Gefechtsturm Arenbergpark
Dannebergplatz 6, Ecke Barmherzigengasse
1030 Vienna
You have not activated cookies from the third party Google Maps. Therefore the content from this provider is not available. You can change this in the cookie settings.
Cookie settings ↗