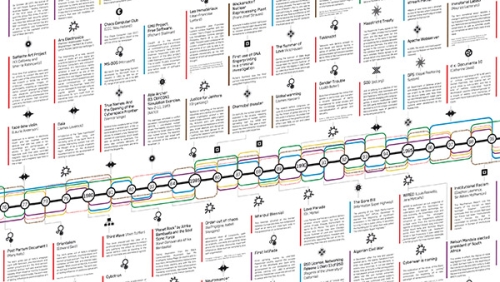 An Exhibition by Technopolitics about turning points

A 10-meter-long textual work sheds new light on the information society viewed across a timeframe of more than 100 years. Here, the genesis and influence of the information society can be studied not by scrolling on a screen, but by walking along the timeline. This multidimensional mapping of political events, technological inventions, and cultural developments shows how the information society has seized and transformed every sphere. The entries may be understood in more depth on the timetable, which presents analog and digital media arranged by categories. A network visualization reveals salient associations between the timeline entries on the basis of Wikipedia.

Technopolitics is a research platform composed of scientists, artists, computer scientists, and journalists, who jointly develop innovative formats at the intersection of art, research, and education.

OPENING in the context of the

Bar with wines from the
Anton Schöfmann wine estate

Thu, 23 June 2016, 5–6 p.m., MAK FORUM
Workshop: Reading and Writing the Timeline
The workshop is addressed to all those who want to look more deeply into the history and present of the information society as well as at methods of mapping.
Moderators: Armin Medosch and Felix Stalder

A cooperation between Technopolitics and the MAK

Supported by:
the Arts Division of the Federal Chancellery of Austria and the Cultural Affairs Department of the City of Vienna (MA 7). 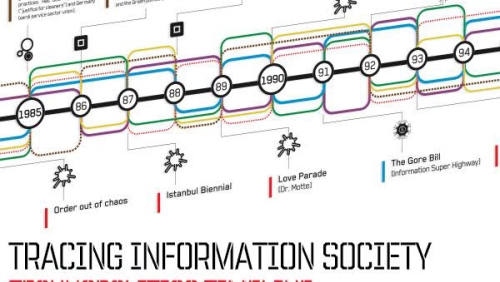