Josef Hoffmann, Chair, Model No. 322, for the dining room of the Sanatorium Westend in Purkersdorf, Vienna, 1904
© MAK/Georg Mayer

Although bentwood furniture was not a Viennese invention, the bentwood chair is still frequently referred to outside Austria as the "Viennese chair.” The technique of bending steamed wood was common as early as the Middle Ages. Born in Boppard on the Rhine, Michael Thonet (1796-1871) was an innovative furniture-maker, and during the 1830s he attempted to develop a technically more economical version of curved, late Biedermeier furniture shapes. He succeeded, using bent and glued laminates.

His move to Vienna in 1842 by arrangement with Prince Metternich opened up to him the much wider market of the Austrian Empire. He continued consistently to develop bentwood techniques further, and in 1852 succeeded in registering a patent for the bending of glued laminates into curvi-linear forms, and finally in 1856 a patent for the bending of solid wood. In addition to the further development of bentwood techniques, Thonet's immense achievement lay in his talent for applying these techniques for producing distinctive products whose natural form and timelessness appealed to a broad public. His aesthetic, which developed out of his fascination with a production technique, opened new perspectives in seating furniture.

From its furniture collection, the MAK presents an overview of over a hundred years of production by Thonet and competing firms, from the 1830s to the 1930s. / Christian Witt-Dörring (curator of the MAK Furniture and Woodwork Collection during the phase of the reinstallation of the MAK Permanent Collection in the early 1990s)

Artistic intervention: Barbara Bloom
The movie synopsis would read something like this: Michael Thonet, a German chair designer, so impressed an Austrian prince with his elegant designs and innovative manufacturing techniques, that he was commissioned to design some woodworking for a palace in Vienna, and then encouraged by higher-ups to relocate his factory to Austria. There, his business flourished to become a late nineteenth-century international success story.

This is an exemplary case of an aesthetically sophisticated designer who was willing to experiment with production techniques. A man dedicated to reductive methods, in which (as a forerunner for the Modernist's "Form Follows Function”) he allowed the intrinsic qualities of his material, wood, to dictate the form of his designs. He was a reductivist in terms of production as well, sparing materials and time with his economical assembly line; turning a handicraft into an international mass-produced industry. He mass-advertised and distributed his furniture by catalogue, indicating that Thonet was also a brilliant early capitalist. He understood the need to develop a consumer society whose needs were created and then met.

It's a good docudrama with a clear linear narrative. I'd like to see the part of Thonet played by someone like Nick Nolte, accented, and convincingly depicting his long and eventful life. There would be International Trade Fair first prizes, certainly several Vienna café scenes, and perhaps a factory class conflict. Good plot!

But I really look forward to (and hope I live long enough to see) a made-for-interactive video-docudrama, which might be made in the early or mid-twenty-first century, about the life of Ingvar Kamprad, the founder of IKEA. This late twentieth-century prototype of business success needs no introduction. But in the future it will be remembered as a marketer of great appeal to a wide range of customers; from most European intellectuals who filed their libraries on "Billy" bookshelves, to young 1 1/2-kid families who were helped over the hurdle of spending money by IKEA's clever tactic of giving every object in their catalogue a proper name. So, you didn't need to buy a couch, when you could bring "Bjorn" home with you.

So, imagine a double-bill of these two movies. Together they form a good paradigm of progress. What lives on? Is it the self-evident aesthetics and design finesse of Thonet? His dedication to experimental techniques? His reductivist methods? Or, some mutant late capitalism, some anthropomorphised form of supply and demand, in which the consumer need is created by "Bambi-fication". I'm sure the IKEA movie will be produced by Disney. / Barbara Bloom

Biography Barbara Bloom
Born in 1951 in Los Angeles. Lives and works in New York.
Barbara Bloom transforms in her work objects from various cultures into compositions and installations. Her primary concern lies in themes related to consumerism, information, and reality. Beauty and symmetry serve her as tools for investigating illusion, fragility, and transience in our society. 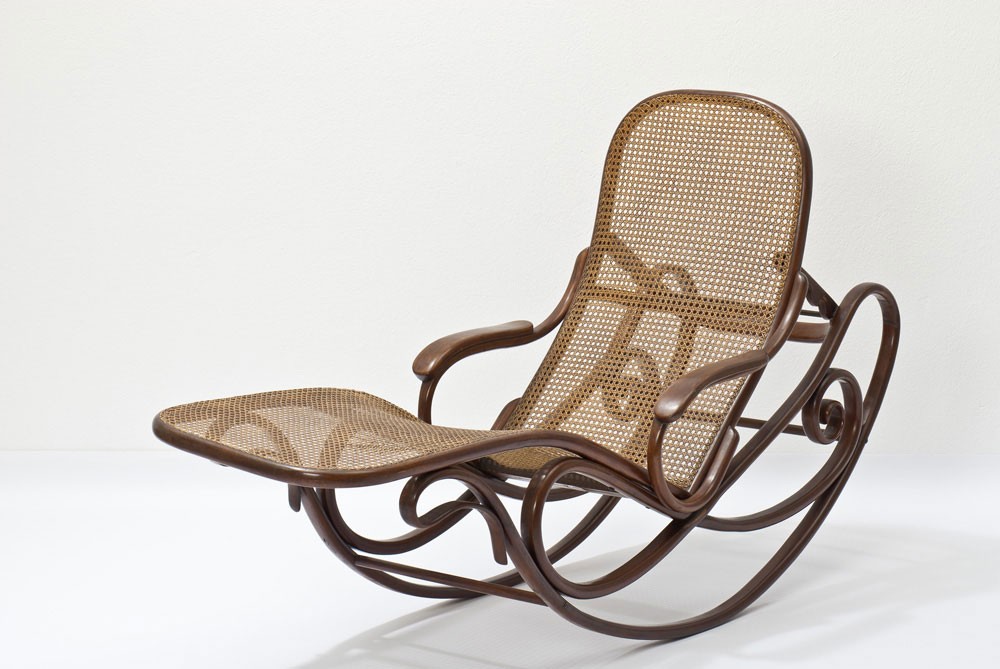 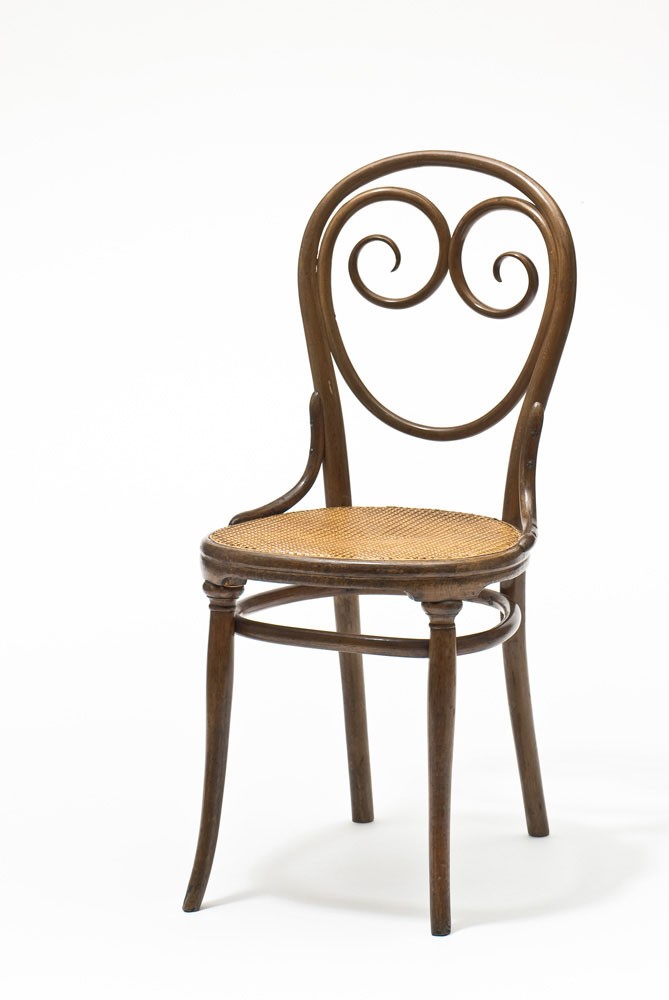 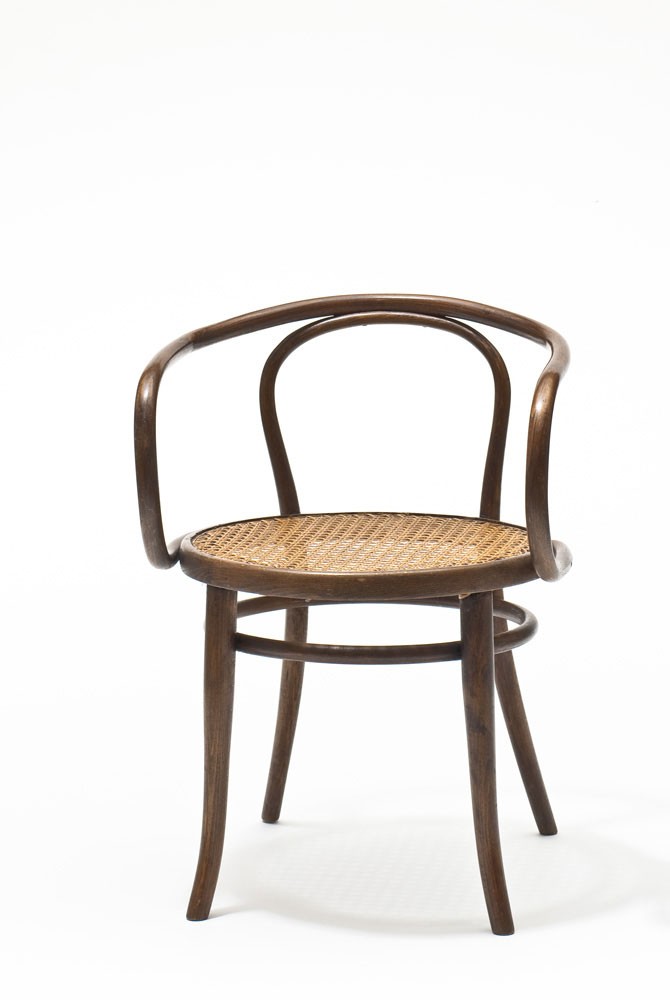 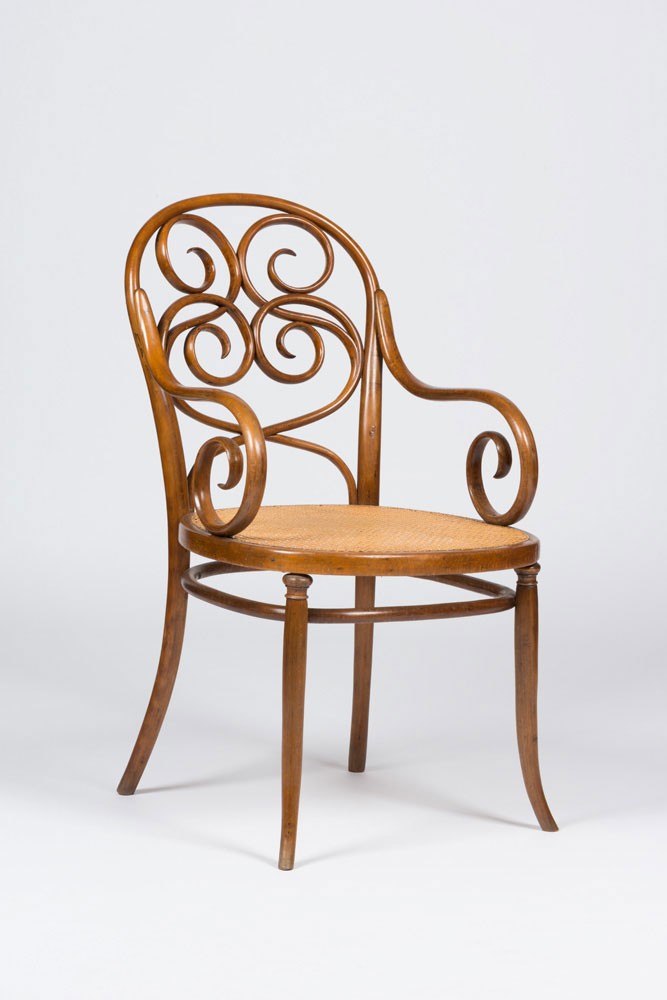 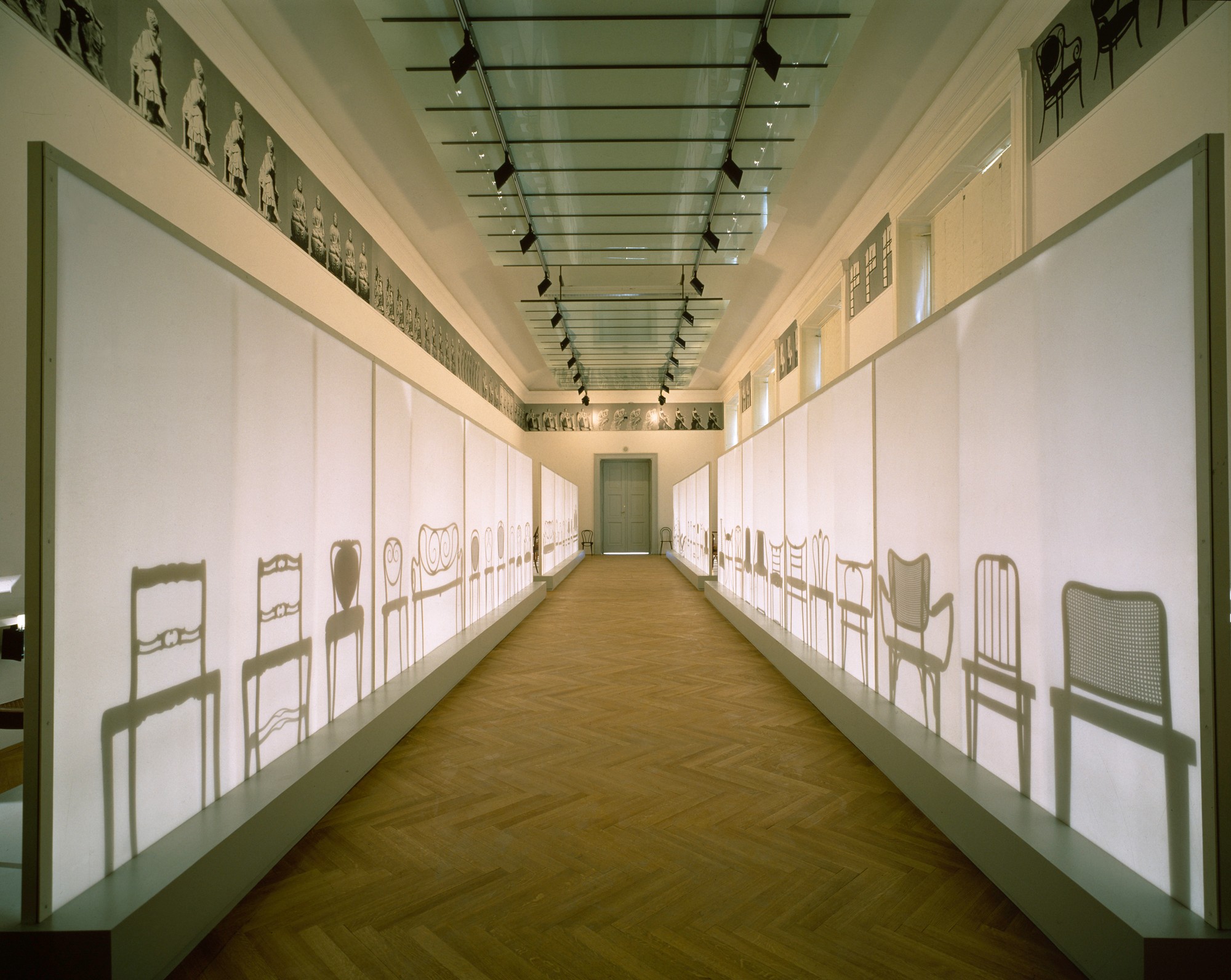 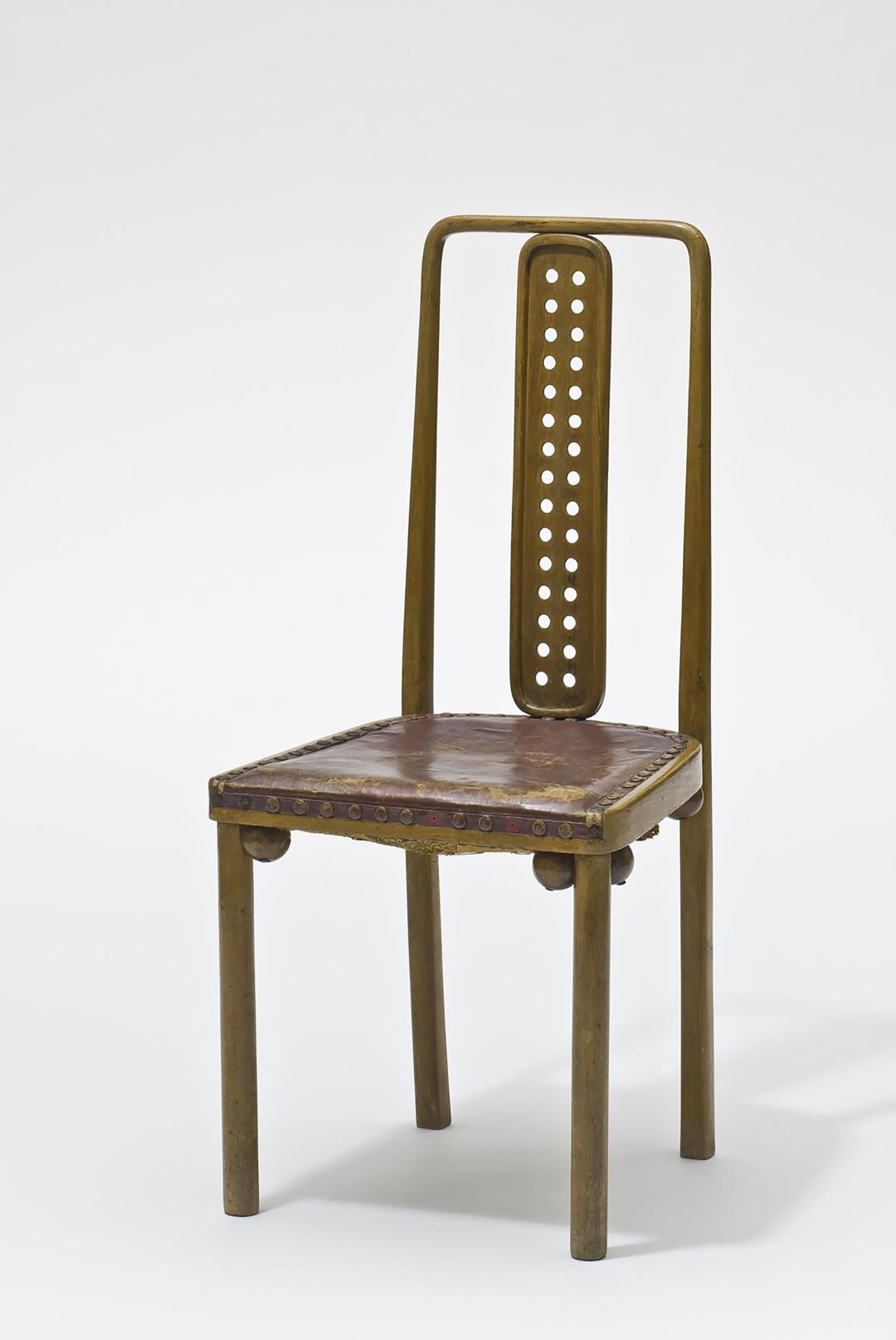 Josef Hoffmann, Chair, Model No. 322, for the dining room of the Sanatorium Westend in Purkersdorf, Vienna, 1904
© MAK/Georg Mayer 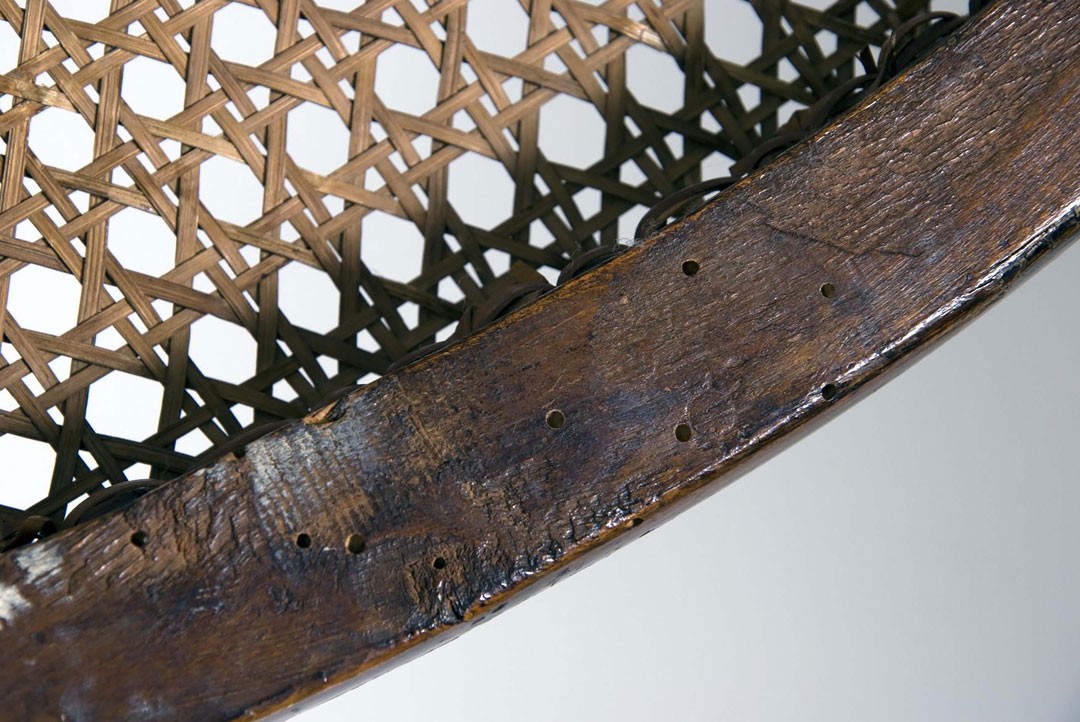